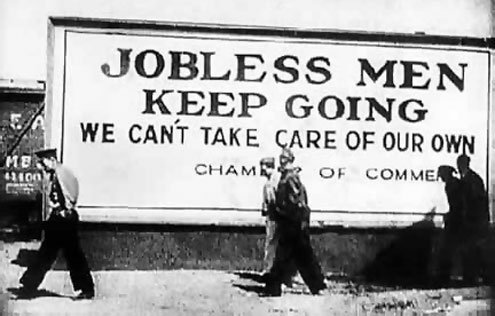 ith ominous tidings inflicted hourly on an already nervous population, the obvious needs restating: The new mass media, larger than any before it, depends on the dire for logic and attention.

If natural catastrophe is a banquet for all tastes, economic woe is poisoned more insidiously.

An economy’s undoing can result from any number of upper echelon mishaps and misdeeds. Its fixing, however, depends on spending, and the system-boosting confidence such spending elicits. Reiterating the severity of a recession to the paralyzed only makes solutions shy to emerge.

The flagrant sensationalizing of Wall Street jitters, along news of company failures, home foreclosures, unemployment data, misleads as well as chastens — since many can’t fully decipher the numbers. Sulkiness is the prudent response.

Capitalism’s inhabitants resolve to wait for the next sunny day, at least those who can. Those who can’t are in turn victimized by the waiters, and exposed to a bottomless kind of alarm. What little they have to spend they don’t.

Enlightened censorship is no answer; nor is blaming television, newspapers and the Internet, though all play a significant part in influencing mood for the worse. What does matter is connecting the “viral” spread of excitement and anxiety to an impressionable public’s compliance with relentless celebrations of the negative.

Franklin Roosevelt’s telling inauguration line — “You have nothing to fear but fear itself.” — represented an early effort to get ahead of the propensity for this kind of mass blues. To it he added maudlin fireside chats. They fixed nothing of themselves but importantly recognized the moodiness of capitalism and the function of a presidential cheerleader. People make statistics.

Modern leadership, wary of excessive interference and itself chastened by edgy tidings, hesitates to wade in sentimentally should the best laid plans falter. Economies fix themselves with appropriate government assistance, or so the thinking goes. The kind of help depends on the kind of government, and as such is inevitably controversial, as all matters concerning money are and always will be.

What’s missing from so-called stimulus packages, ironically, is the personal side of the stimulant. Bailouts and incentives are instead delivered as stand-alone reassurances, as medicines introduced to cure an outside infection.

But recession, inflation, stagflation and depression are all conditions, or stages, of the same malady. They improve when the patient, the public, gets back the strength of good cheer, and hope, which is in turn transformed into investment. When they fail, doctors and drugs are both blamed and their prescribers punished.

Under Ronald Reagan the rich got richer than their wildest dreams; fairness mattered little. At the same time, Reagan’s intransigent level-headedness and literal belief in money helped the United States regain its footing following two weak presidencies and a forgettable decade, the 1970s.

He transmitted the kind of American optimism (American magical realism, really) that headlines took to. His bedside manner functioned outside policy.

The demands placed on national optimism are heavier than ever before. Data streams are most aroused by breakdowns, which act as immediate intimations of mortality at a time when immediacy comes before all else. Hints of destruction fascinate every kind of mob. When the economy comes up, so, naturally, do words like “crippled” and “woeful.” “Tough times” makes every conversation.

There’s no arguing with American indebtedness, both personal and national. It began, in fact, under Reagan.

But until government perceives the mechanism of recovery in more holistic terms, understanding that no system, including capitalism, can remain robust without affirming why it matters, and accepting that 21st century recession is a byproduct of “fear itself” anxiety, wrench-oriented repairs are destined to fall short. People need and want causes: The ascent of Barack Obama proved it.

Economically, a recession reflects a general slowdown. Socially, it’s a collective loss of faith followed by a visceral deference to ongoing doubt. Awareness of that loss of faith also means to dwell on it, worsening the doubt. The many components of loss gradually become the only public topic. Same with blame.

No vicious circle is more classic or compelling.

Though pessimism’s entrenched slogans badly need an antidote, the onslaught of bad news leaves little space for such antidotes to germinate. Instead, public woe is both convenient, and expected. For things to change, particularly in an emotionally-charged climate, such expectation must become as intolerable as a terrorist attack.