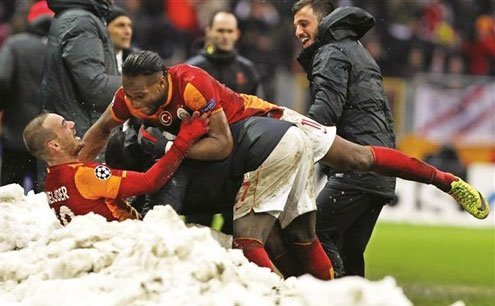 Wesley Sneijder rejoices after pacing Galatasaray past Juventus in the Istanbul snow.
D

ecember was a dark month for Italian football clubs. First, Galatasaray dumped Juventus out of the Champions League on a snow-laden surface in Istanbul. Next out was Napoli, its 2-0 victory over Arsenal insufficient after Borussia Dortmund’s last-gasp win away to Marseille.

That left AC Milan as the only Italian team in Europe’s premier club competition. And there was nothing too pretty about the way it secured its path to the round of 16. Reduced to 10 men after 22 minutes, both Milan and its woodwork rode their luck to a goalless draw against Ajax — the final 15 minutes spent largely trapping the ball by the opposition’s corner flag.

Despite his own club’s merciless elimination in Turkey, Juventus President Andrea Agnelli was refreshingly congratulatory in text messages to Milan CEO Adriano Galliani: Vi abbiamo lasciati da soli ma conoscete bene la strada (“We’ve left you on your own but you know the way around.”)

Milan is comfortably the most successful Italian outfit in Champions League history, with seven titles — the last one in 2007. But recent years have not been kind to Massimo Allegri’s embattled club. At the Christmas break, the Milan side sat a lowly 13th in the Serie A table, well behind traditional rivals Inter and Juventus. Former Milan midfielder and Croatia International Zvonimir Boban recently called the team “the worst of the Galliani era.” Adding to the burden, Milan drew Atletico Madrid in the Champions League round of 16, suggesting any further SMS dialogue between Agnelli and Galliani may read less cheerfully.

Atletico Madrid lies second in La Liga on goal difference (behind Barcelona) and didn’t lose a CL group match on its way to 16 points. If Atletico eliminates Milan in February, Italy will be without a team in the competition’s quarterfinals for the first time since 2009.

What made Agnelli’s goodwill gesture all the more impressive was that Juventus represented the country’s best chance of bringing the trophy to Italian shores. That Antonio Conte’s men could only muster one victory from a group including FC Copenhagen and Galatasaray, neither one a powerhouse, was indicative of Serie A’s reigning champions’ historic inability to replicate their domestic form across the continent.

Wesley Sneijder’s decisive goal for Galatasaray in a delirious Türk Telekom Arena rather typically brought a smile to the faces of Inter Milan fans, so fond of the 29-year-old Dutchman after his key contribution to their treble-winning campaign in 2009-10. Though Juventus’ elimination at such an early stage may have weakened Serie A’s UEFA co-efficient ranking, hurting future Italian CL seeding, the result was also the cause of relief to supporters of rival clubs. Given Juventus’ domestic domination, the team’s missing out of the millions on offer via the Champions League may help level the playing field in the next couple of transfer windows.

By finishing third in their respective groups, Juventus and Napoli can still compete for silverware abroad, albeit in the inferior Europa League. With Fiorentina and Lazio qualifying from the group stages, a fifth of Serie A’s teams will be involved in the Europa League round of 32, scheduled for the end of February.

Conte’s men are the bookmakers’ favorites to play in and win the May 14 final — a match they will host in Turin. But they will need to exorcise their Turkish demons if they are to enjoy the next round — a two-legged affair against Trabzonspor. The Turkish Süper Lig outfit held Lazio to two draws in the group stage, but they are unlikely to replicate Galatasaray’s improbable success.

Napoli, meanwhile, will face Swansea. The Welsh outfit qualified for the Europa league after winning last season’s Capital One Cup. It was the club’s first-ever silverware as well as its first European qualification.

Napoli boss Rafa Benitez has bad memories of the Swans’ debut trophy success. He was at the helm of Chelsea last season when it suffered a 2-0 aggregate defeat to Michael Laudrup’s side in the semifinals. The Spaniard will also have noted Swansea’s comprehensive 3-0 victory against another former club, Valencia, in a September group-stage meeting. The winner of this tie will face either Porto or Eintracht Frankfurt in the round of 16.

Fiorentina, which collected an impressive 16 points from a possible 18 in the group stages, will fancy their chances of overcoming Danish minnows, Esbjerg fB. But Vincenzo Montella’s men will do well to progress any further, with an all-Italian affair against Juventus looking very likely in the following round. By then, Montella should have German striker Mario Gomez off the treatment table to partner Serie A’s leading goal scorer Giuseppe Rossi, who stunned Juventus with a memorable hat trick in a 4-2 triumph last October.

Lazio, meanwhile, will face Bulgaria’s Ludogorets Razgrad. The Bulgarians are not to be underestimated. They won their group ahead of PSV Eindhoven and Dinamo Zagreb. If Lazio progresses, it would draw either Dynamo Kiev or Valencia.

Salvaging some of Italy’s reduced pride is more than just a formality. Whoever reaches the final at the Juventus Stadium in May will have played a total of nine matches, added on to the regular league and domestic cup campaigns.

Managers will need to be wise with their squad rotation to deliver results on three fronts. Fans of Serie A, meanwhile, will have to get used to the growing phenomenon of Monday night football — an unfortunate by-product of the Europa League holding its matches on Thursday but also a punishment of sorts for Serie A’s failure to deliver in the Champions League.