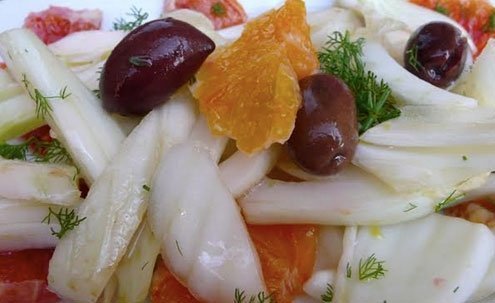 Crunchy fennel and orange salad is great rabbit food if you don't have a rabbit handy.
W

izardry never seems to get old, and certainly not in rural Italy. Forget Harry Potter and Magnus Bane. I’m talking about alchemists and fortunetellers. I’m not terribly into the magical arts but my interest in cooking has occasionally whisked me up against them.

For example, I once had a boyfriend whose father was famous for making an herbal potion that allegedly cured all skin diseases, including lethal ones. I secretly obtained a small flask for a girlfriend who dabbed some on. But it burned her badly and she never talked to me again. I broke up with him soon thereafter. He was — no surprise — a very strange guy.

More recently, I met two people who work for a fortunetelling hotline. For a modest fee, they’ll happily tell you if lightening will strike your husband’s mistress any time soon. In fact, if you’re considering starting a new business and short on ideas, you might consider phone wizardry (or you might already have it in your future; call and check). I’ve been told phone companies are making big bucks out of it.

But my favorite shaman is our mechanic, Signor Bruno. Signor Bruno a former boxer who at 74 still works out every night for at least an hour after coming home from his car repair “office.” He’s a dedicated vegetarian, except once or twice a year when rabbit and roast inevitably end up in the same Umbrian sentence. Umbrians love their roasts and I’m surprised more rabbits don’t get their fortunes told. They’d probably migrate.

Signor Bruno is one of those guys who rescues you when your car breaks down on a Sunday or a holiday. He’s great at pulling cars out of ditches (not barehanded, but close), and he charges next to nothing.

To me, Signor Bruno is a car whisperer. He doesn’t need computer diagnostics or automotive MRIs. Instead, he opens your trunk, probes the entrails, pokes at a few tubes (the poking is important) and unfailingly emerges with a concrete diagnosis. He also supplies replacement parts that work better than the original ones and cost less.

He’s a true healer, which makes him something of a dying breed. A true healer arrives when you’re really in trouble and actually fixes whatever’s wrong. Signor Bruno is also honest. As soon as he’s done he smiles broadly and sends you on your way. Then he goes home to dine on some of his favorite crunchy rabbit food (unless a few rabbits failed to get their fortunes told and find themselves cooked).

— Try getting fennel bulbs with their fronds intact, so you can sprinkle them on top for décor and to heighten flavor. In a salad bowl, whisk the oil, lemon juice, 1/4 teaspoon of salt and a twist of black pepper. Add the sliced fennel bulbs and the olives and toss. Taste to check the seasoning.

— Transfer the fennel to a serving plate and top with orange slices and the fennel fronds. Drizzle the rest of the dressing from the bowl and add a bit more olive oil. Serve when ready.

And if a weird man appears at the table offering you miraculous skin cream, just keep eating.