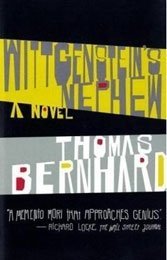 By Thomas Bernhard, translated from the German by David McLintock

Had Goethe’s sorrowful young Werther decided to forgo suicide in favor of growing old he might well have been sucked into Bernard’s pantheon of cranky Central Europeans, aging angst-merchants who paradoxically celebrate all that is unendurable, futile, terrible, and depressive.

Bernard’s fictional reminiscence of his friendship with Ludwig Wittgenstein’s obscure cousin Paul is a memento mori with benefits. Bernhard’s Paul (not Paul Wittgenstein, Ludwig’s one-armed concert pianist brother) is brilliant, unstable and relentlessly down-on-his-luck. His presence in a mental ward coupled with sickly Bernhard’s hospitalization for lung woes — it’s 1967 and both are seriously ill — introduces their misery-likes-company bond. Paul and Bernhard are peerless complainers, whether the subject is doctors, psychiatrists (compared to serial killers), health care, Austrian newspapers, literary prizes, and “Viennese cultural insolence,” which they batter relentlessly. But their reciprocal caring is genuine and ultimately matters more than what they find hateful.

Bernhard, a snarling Teutonic Lenny Bruce, gives meticulous substance to their estrangement. Like quivering antennae, the two personify the ambiguous space between external contempt and self-hatred. They’re addicted to what they despise. Bernhard announces he has always hated Viennese coffee houses. Why? “Because in them I am always confronted by people like myself…” Bernhard’s importance as a writer cannot be separated from the inquisition he imposes as severely on himself as on the nutty world around him. He’s a thinking man’s oddball.