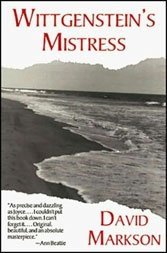 Encourage the last person on earth, a painter named Kate, “curator of all the world,” to ruminate on planes, trains, art, literature, philosophers, and you peel away the first layer from Markson’s almanac, a monologue that makes for “an absolutely autobiographical novel.”

Markson’s Kate is an obsessively observant vagabond who — if you believe her — once lived in the bowels of the Metropolitan Museum in New York. Stick in hand, drawing Greek characters on a beach, she offers a Rolodex of maybes that mingle two millennia of intellectual history and gossip to produce an idiosyncratic natural order. Kate leaves considerably less than six degrees of separation between the likes of Helen of Troy and Stan Usual (history she loves, baseball less so).

Curiosity and erudition are part of Markson’s card trick, but so is selling the reader on the permeability of membrane dividing the mundane from erudition, illumination from madness. Quirks are the story’s lunatic music: Michelangelo never bathed, Shakespeare and Keats were tiny, Rembrandt’s one-eyed cat was named after a mythical dog, Spinoza had a thing for spiders, Aristotle lisped, Nietzsche sobbed when someone hit a horse, Joyce feared thunder.

Kate’s insatiable speculation (“…what is there that is not in my head?”) is proof of life, just as speculation is timeless and eternal. She’s too human to limit her meanderings (“… There is no better way of keeping sane and free from anxiety than being mad.”)

Despite comparisons to Samuel Beckett and Malcolm Lowry, American Markson worked outside most known genus or genre: His is a whimsical and wonderful expose of how thought comes to be, chewed over in solitude, the end of the world like any other day in the mind. Time out of mind is time well spent.