With the Tuscan… male 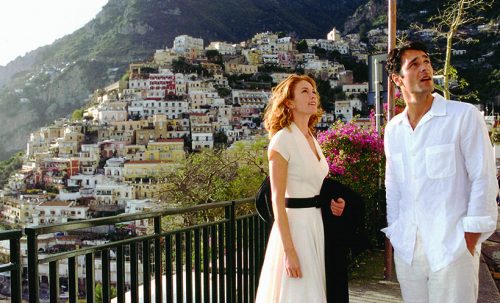 The idealized "Italian Male of the Species," Raoul Bova (with Diane Lane), in 2003's "Under the Tuscan Sun."
D

When I was 17, I watched “Under the Tuscan Sun” with one of my best friends. In it, Diane Lane falls in love with this dashing dark haired, blue-eyed Tuscan who dresses perfectly and enjoys listening, drinking coffee and taking her to all these beautiful destinations.

This depiction of the Italian male was one I felt I knew well. My mother always spoke of her preference for dashing Italian men. In her stories, they always surpassed the unstylish, slightly overweight and romantically stunted Australian bloke.

Her Italian Male was a creature of incredible beauty and physical prowess that could cook, dance and whisk you away on a cloud of passion and romance.

My father was a near-sighted Venetian accountant who brought two things to their marriage: a sack full of hereditary flaws and a handful of woolen sweater knitted by his mama.

My husband’s love for McDonald’s is almost as ardent and his idea of romance less “Roman Holiday” and more “Teen Wolf.”

He passed away soon after her 30th birthday and she hasn’t dated anyone since, so her eternal love for him clearly surpassed his aesthetic shortcomings.

Almost two decades later, I packed my bags and went in search of my own Italian Male. My father didn’t fit the Italian archetype, but I was undeterred, assuming he was an anomaly, blunted by a lifetime spent in Australia and possible inbreeding. My grandparents had the same surname. You do the math.

I was sure that if I went to the source, I would find the mythical creature of my childhood stories.

Oh boy, did I find him. In Tuscany of all places – why go off script, right? And I have two words for you.

My husband is tall, dark and, in my mind, handsome. The Italians would say, la bellezza si riflette solo negli occhi di chi la osserva – basically, beauty is in the eye of the beholder, and I tend to agree.

But let’s be blunt. He once professed that romance was for girls, along with dancing and holding hands.

He chose his laptop over an ex-girlfriend, preferring the company of its brightly lit screen to her physical presence after midnight. When she caused a fuss, he bought a bunk bed for them.

When I met him, he wore striped sweaters and sandals. He didn’t own a comb, believing, wholeheartedly, that his curly fro was, and I quote, Argentinian-sexy.

He is as pale as milk. His idea of fashion is wearing whatever is within arm’s reach. He won’t shave unless he is absolutely forced to and he will talk your ear off about politics and, of all things, American basketball.

As I flick through the figurative index cards of personality traits I coveted as a love-struck teenager, my Italian Male doesn’t fit a single one.

And neither, might I add, do most of the men I’ve met in my more than 11 years in Tuscany.

I was at a food festival over the weekend with my not-so-Italian husband and he remarked on how poorly his compatriots were dressed. He said they looked like Greeks, which, if you know anything about Italo-Greek relations, is hardly a compliment.

I reminded him that we live in the sticks, not Florence, but he had a point. The beautifully dressed Italian Male we all recognize from a thousand movies is nothing more than a figment of our imagination, a creation of Hollywood, a stereotype way past its sell by date.

It is one of the most insidious and yet entirely underrated effects of globalization. Brands like Zara and H&M have standardized the way we dress. The Italian Male of 2018 is impossible to differentiate from the Australian Male, the American Male, the Greek Male, the British Male.

When she painted the picture of the Italian Male, my mother didn’t realize the Italy of her youth, the Italy of the 1960s, no longer existed. My grandfather and her brother, my uncle, were, for better or worse, shining examples of her ideals, but my far more modern Italian husband is not.

I bought what she was selling, hook, line and sinker, but I don’t mind. Remember that effortlessly handsome Tuscan from “Under the Tuscan Sun”? The man who got me into this mess in the first place? While researching this piece, I discovered the actor who played him isn’t even from Tuscany. He’s Calabrian, like my mother, go figure.

So I guess next lifetime, I should really do my homework before travelling 16,093 kilometers to find a husband.