With the greatest of ease 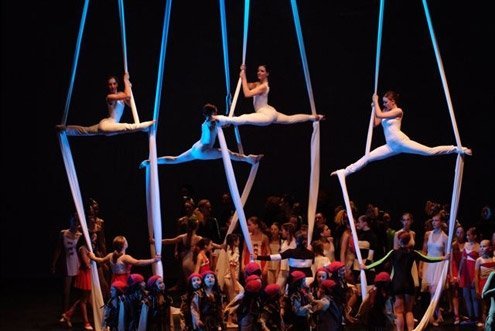 FLIC was created in 2002 and offers circus training in a two-year program, with a third year optional.
T

he building at no. 11 Via Magenta in central Turin is as imposing as the institution it houses, the Reale Società Ginnastica di Torino — Turin’s Royal Society of Gymnastics. Even the medieval crest beneath the entrance issues a bold proclamation, “Je atans mon aster” (“I await my star”), the slogan of Savoy Count Amadeus VI, who in the 14th century crusaded against the Turks abroad and fought for social justice in his city.

The building’s look is perfectly suited to Turin. This is a city whose center brims with sophistication. All around are grand squares, historic cafés with resplendent chandeliers, and picture-perfect representations of Baroque architecture.

But walk into the three-story palazzo on Via Magenta and what greets you is something else entirely, and something surprising: acrobats flying through the air with the greatest of ease, somersaulting, climbing, balancing, even pretending to tumble from great heights only to break their fall at the last moment. High above is a “lyra,” a metal hoop suspended from the ceiling that acrobats use to perfect stunning “silk” and “hoop” routines, routines that have made Canada’s Cirque du Soleil into an international hit. Ladders and brightly colored silks are basic tools of climbing and performing.

For 169 years, the Turin Royal Society has trained aspiring athletes in classical gymnastics. But since 2002, it has also hosted the FLIC Circus School, a two-to-three year long vocational program intended to train students in acrobatic circus arts as well as contemporary dance.

“It’s open to everybody,” says 49-year-old Matteo Lo Prete, school’s director who also doubles as a trapeze and acrobatics teacher. FLIC’s two-plus-one year program — the third year is optional — caters to aspiring global acrobats interested in pursuing a career in the contemporary circus world. There are also night classes and weekend workshops for amateurs of all ages and skill levels.

To find such a school in Turin is intriguing. The Piedmont capital, a metropolis of more than 900,00 people, has long been renowned for its hardworking ethic and no-nonsense approach to day-to-day life, but also for a kind of detached politeness if not slight snobbishness, something foreign journalists covering the 2006 Winter Olympics noted in some of their dispatches. The disparaging expression “torinese falso e cortese” —insincere but polite people — still haunts the city.

But there’s nothing remotely false about FLIC’s night classes, which are usually packed with local amateurs diligently practicing acrobatics, juggling, trapeze and aerial silks. The overall sense is that of a tight community willing and eager to combine vigorous training with playfulness.

“There’s no snobbery in circus,” says Lo Prete. “People aren’t presumptuous. Practicing the art of contemporary circus skills is like being part of a family. Everybody is here to help, to share, and to learn through hard work. I’ve seen our most famous acrobats train with beginners or amateurs.” Humility, he adds, is paramount, and normal. In a circus “everybody mounts and dismounts the equipment, the sets,” notes Lo Prete, literally putting everyone on a level playing field.

But enrolling at FLIC can be humbling. Would-be circus performers must first pass an audition. If accepted, they pay a stiff €2,900 annual tuition. The 2013-2014 class, selected in August, numbers 20 domestic and foreign students between ages 16 and 22.

“After the two year basic program, students can decide if they want to continue for another year or to apply to other more advanced international schools,” says Lo Prete. The final year is usually dedicated to a student’s chosen specialty.

The school’s name, FLIC, comes from a basic gymnastic move, the flic-flack — a flip-flop or back handspring. It suggests the school’s role as a steppingstone for a circus career.

“We have about 220 alumni and 90 percent of them continued on in the circus world, whether in a circus, a dance company, or starting something of their own,” says Lo Prete. “We’re very proud of that figure. ” One graduate joined the Cirque du Soleil.

“But what we do here is different,” notes Lo Prete. “[Cirque du Soleil] art is traditional circus. Ours is more contemporary. Though we teach all circus disciplines, we also place a lot of importance on interpretation. Acting and dramatic expression are just as important as the acrobatic work. We are circus actors, they are circus acrobats.”

A FLIC show, held each Sunday, illustrates the difference. “We call them Circo in pillole [a pill-sized circus] and we do the shows right here in the gym. There’s a big advantages to working in a place with Baroque architecture. The gym is so big it can be easily transformed theater,” laughs Lo Prete. The Sunday work helps the circus actors learn to perform in from of a live audience. The shows are free and the house is always packed.

As we chat, a daylong swinging trapeze workshop attended by a young acrobat from Naples and a 40-year-old Turin waitress is winding down. The instructor is Justine Bernachon, a French trapeze artist. She has one more exercise for her students. “Just dance,” she tells them in French-accented Italian. “Dance makes you loosen up, makes everything fun and friendly.”

With a leap, she and her two students take to the trapeze in their own way, establishing a sense of pace and style until, like the acrobats of old, they’re dancing on the ropes.