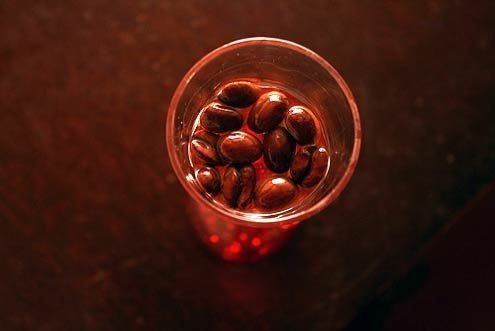 Always many flies...
I

arrived in Rome on a Wednesday morning, saw a “Waitress Wanted” ad on Wednesday night, and went to an interview on Thursday. They asked if I spoke Italian.

“Come in on Friday,” they said.

This was at a sports bar on Via del Governo Vecchio during the World Cup in 2006. When I got there it was crammed with charged football fans.

I understood Italian decently, the Italian of Dante, Boccaccio, Petrarch, and the subjunctive tense. But the Italian you learn at college isn’t the Italian of Rome’s street life. As a waitress, command of grammar and vocabulary isn’t enough; knowing culture and slang is essential.

But there is no culture training for servers in Rome; employers show you the locker room, give you a shirt with a logo, and shove you out there. The other waitresses told me to just go and take the order of anyone who looked at me.

My first patron was a sixty-something Roman signore. He asked for a “stained.”

I wrote down “stained” and took it to the bartender, who told me it was an espresso with a splash of milk, a macchiato. “Oh,” I said. I took the man his stained.

The next guy asked for a beer with a thorn in it. I said we didn’t have beer with thorns. He told me that we did. I told him I was pretty sure we didn’t but that I would check. I went to the bartender and showed him my notes. He told me that alla spina meant on tap. “Oh,” I said, and sheepishly took the guy his beer.

Meanwhile, Italy was playing Germany in surround-sound and everywhere I turned there was a screen. I had to place myself strategically to take orders and deliver drinks, or else I’d get angry shouts from the person whose view I was blocking.

I tend towards shyness (I used to rehearse what I’d say at to the cashier at the grocery store before I got in line to pay), and my voice broke as I tried edging through the rooms with my tray. Permesso, I squeaked, scusate, I whispered.

After the first half hour I’d become incredibly nervous. I was shaking and desperate to go home. My only job was to take the order of anyone who looked at me, so I kept my eyes down.

Someone tugged on my apron.

“A sambuca with flies.”

The barman told me that flies, mosche, were coffee beans and that I should get them out of a jar near the peanuts. When I brought the flies to the table I was shooed away with a flip of a wrist in my face. Apparently two flies are bad luck. I went to get a third fly.

As I was putting it down, the manager, Mario, shouted for me to get the broom, someone had broken a glass at the bar.

I fought my way through the crowd to the bar. I couldn’t find the broken glass, in fact, I could barely see the floor. I whispered in Italian, “Excuse me, please, some space.” They just stared at the game.

At that point frustration finally overcame shyness and I screamed in Italian: “Everybody move! I need some room here, I am trying to sweep. If you want me to sweep you are going to have to move! I don’t care if you can’t see the game, for five seconds you’re just going to have to watch me sweep instead!”

An entire room of men holding beer stared at me in silence. They backed away. I was proud of myself. They had listened to me. I was finally creating my Italian persona. I had conviction. I didn’t have to be afraid to speak; I spoke well, people listened.

I found the glass, swept it up, and dashed out of the barroom as the crowd closed back in. In the next room Mario waited. He looked half-angry, half-bemused. He asked me if I smoked. I said I sometimes did. He asked me if I wanted a cigarette. I said that I definitely did. He gave me one of his and then guided me outside. He let me light it and take a few drags.

Then he told me that in Rome “to sweep,” scopare, didn’t really mean “to sweep.” Another meaning had all but usurped the original.

I gaped at him as he told me what I’d screamed in the bar. “Everybody move! I need some room here. I am trying to have sex. If you want me to have sex here you are going to have to move! I don’t care if you can’t see the game, for five seconds you are just going to have to watch me having sex instead.”

No wonder they got out of my way.