With Billy on the Kapuas River 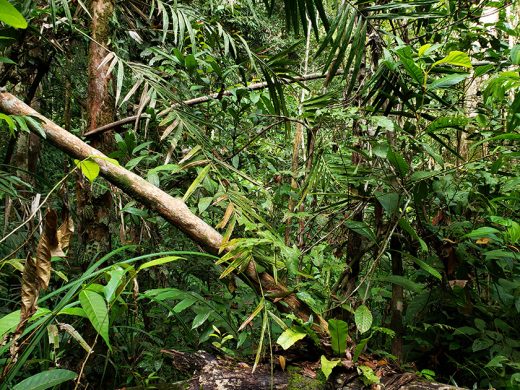 Parts of the Kapuas River in the Indonesian part of the island of Borneo. Author's photo.
G

od is a comedian playing to an audience too afraid to laugh. — Voltaire

Billy, the short man at the bow of our skiff, is regaling the four of us with a story of a local man standing on a riverbank fishing. We’re cruising the Kapuas River in the Indonesian part of the island of Borneo. Powered by a tiny motor, the boat proceeds so carefully it makes no wake. Trees lining the river crowd the banks about one hundred yards apart. The army green water looks as thick as pea soup. Billy tells his story as slowly as the boat is moving.

A large crocodile lay unseen just inches below the water surface and suddenly thrust itself up and out, in a great wash of water, sounding very much like a fat man rising from a bathtub. The crocodile clamped onto the fisherman’s right foot, and dragged him to his drowning death, and the crocodile’s dinner table.

It turns out ‘food chains and your place in them’ is a common theme of guide stories in Borneo jungles.

Our guide’s point is simple. Do not dangle your arms in the water on this humid and fetid afternoon, tempting though it is. He looks at my wet hand. I pull my fingers back.

I have come to Borneo to see what is left of it. In the past forty years, Western demand for palm oil has decimated thirty percent of the rainforest on Earth’s third largest island.

Our skiff journey ends at a longhouse sitting majestically high not twenty yards from the water. The motorman guides us along a pier of rotten wooden planks hammered together with nails so rusted they crumble.

A large crocodile lay unseen just inches below the water surface and suddenly thrust itself up and out, in a great wash of water, sounding very much like a fat man rising from a bathtub.

We’re eager to stretch our legs. While the motorman ties up the skiff, Billy is excited to show us something immediately. He won’t tell us what it is, though I find out later it was a waterfall. Jungle waterfalls are exquisite. I love the sight and sound of them, especially the forty-foot one in my backyard at home.

He leads us to the edge of a dense forest about one hundred yards from the longhouse. He points to a “path” I don’t see. We’ll be bushwhacking. Before we know it, Billy and three men, and one woman who trails the line, plunge into the jungle. The hike will take thirty minutes, nice, easy and level.

We make it half way.

The thick brush makes hard going. I’m wearing ankle-high boots and heavy pants, so the low branches don’t bother my legs, but the brambles inch up my cuffs as I walk, and that becomes inviting.

From the left, in a quick strike, a snake shoots out of leaf cover and bites my lower shin, just above my boot. The woman behind me screams. I look down.

Borneo, once controlled by both the British and the Dutch, is the largest of Indonesia’s vest network of islands and trenches.

In all my travels I’ve had more than a few moments like this, and they have taught me a sense of detachment. I remember thinking, “This can’t be good,” before the fire began to creep up my leg. Damn, it hurt.

Billy worked fast. He slid his machete from his backpack and sliced the snake in two with a great whomp! He told everyone to walk back the way we came.

I never had reason to think about how one removes a biting snake. I had just learned that cutting the snake in two does not make it simply fall off. Billy had to slide the machete blade parallel down the side of my leg, inserting the pointed tip between the snake’s jaws, and pry it off my skin.

The amount of blood was considerable, but that was expected, though I didn’t know it at the time. This was a rednecked keelback, a snake whose poison contains an effective blood thinner. Think backup: if the poison doesn’t kill you, maybe you’ll bleed to death and the snake will still have a meal.

I limped back, my left arm around Billy’s shoulder, his right around me.

“Is it poisonous?” I asked.

They got me in the skiff for a solitary ride one hour north, to a clinic. The harsh sunlight filtering through the treetops became my mortal enemy, and hurt me almost as much as my swelling leg did. I closed my eyes, and leaned back, and let my right hand over the edge into the water. It was wonderfully cool.

“Ah, you don’t want to do that, mate,” the motorman said. “Remember the crocodile.”

For the record, poisonous snakes are not venomous snakes.

I tried to tell him that that was why I went anywhere, to put my hand in the water. It’s not to everyone’s liking, I know. Most people don’t get anywhere near the water. They view the world through bus windows, listening to guides with umbrellas held high so no one gets lost. I wanted to tell the motorman that I’m the guy who wants to get lost. Instead, I shot up violently, leaned to my left, and vomited all over his boat.

When we arrived at a plantation-style house, with a tin roof, a wide sweeping porch and peeling yellow paint, the motorman helped me from the skiff. I hopped with my right leg, as by then I could not walk on my left without considerable pain.

“Okay mate,” he said, as we dragged my leg along, “You’ll be right soon enough. You’ll have a story to tell!”

Oh, I have plenty of those.