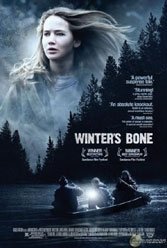 Set deep in the unfilmmable poverty of the Ozarks, “Winter’s Bone” is a film noir for the neglected American South. Blood runs thick. Towns are more like tribes. Seventeen-year-old Ree (Jennifer Lawrence in an Oscar-nominated role) treks through trash-strewn yards in search of whatever scattered family she can drum up to get closer to her father, a crystal meth-cooking bogeyman who fled town after posting bail with the deed to the family home.

Without her father home in time for his court date, Ree will lose the house and land in which she cares for two young siblings and catatonic mother. But Ree’s poking around is met with violent scorn (“Ain’t you got a man to do this for you?”). She has no business knowing why or where her father has gone — at least according to the sketchy outliers of her family, rotten with drugs and guns. Ree has one ally, her father’s crack-snorting brother Teardrop (John Hawkes, who also earned an Oscar nomination), but even he rages on with the unpredictable and taciturn.

The tone is as freakish as a Flannery O’Connor southern gothic while the savagery could match wits with the Coen Brothers’ darkest moments. Yet Director Debra Granik has created her own world: a hardboiled Arkansas wilderness closer to a wild west nightmare — lawless and intimate, claustrophobic but fruitlessly expansive.

As a final warning, a disgruntled family gang kicks in tenacious Ree’s teeth. They leave her body for black and blue, a reflection of the film’s muted cinematography. The movie’s lesson is understated but clear: that kindness and cruelty can be wound so tight they’re inseparable, even indistinguishable. An Academy Award nominee for Best Picture.