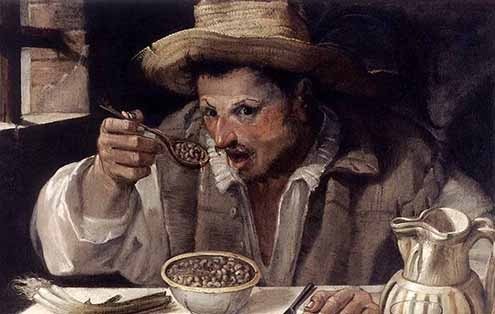 Winter is a time when comfort food is king.
S

ome dishes perform little miracles by triggering memories that make food taste that much better. Others help heal us when we’re sick, no small feat in an era when people pop antibiotics like candy. That’s why we ritually return to tried and tested recipes. They’re our Linus blanket.

In winter, I have my own set of comfort food classics. They warm and pacify and help me ward off the blues that early nightfall brings on. I once nursed a broken heart on a strict diet of passatelli in brodo, pasta simmered in chicken broth. It worked wonders.

Passatelli is a Bologna specialty that takes the mystic healing and comforting powers of chicken soup to an entirely new level. The peasant dish is the product of equal parts breadcrumbs and grated Parmesan, plus one egg per person. These ingredients are kneaded into thick golden dough, then “passed” through a special tool. The tedious pressing and dragging is offset by the resulting passatelli, which are worth the workout.

When our old passatelli “iron” broke and couldn’t be replaced, we made do with a wide-mesh potato ricer. It wasn’t the same thing, but it worked.

Stracciatella is another of my winter staples. As it turns out, the gelato flavor and the burrata filling that go by the same name are far more popular than this peasant winter minestra. But don’t confuse them. Stracciatella is an Italian egg-drop soup built around meat broth. It’s far simpler to make than passatelli. First, you boil good bones and vegetables to produce a hearty broth base. Once you skim the fat and clear all the solid elements, you whisk the broth into a vortex by swirling in the same direction. You slowly pour the beaten eggs into this whirlpool, stirring and shredding the egg cooking in the broth. The result is a soup with a delicate, fine-grain, soul-soothing texture. My nonna used to serve stracciatella sprinkled with a touch of lemon zest.

Another winter favorite — which could easily work in any other season — is lentils. The ritual of preparing lentils is almost as assuaging as eating them in silence. One of the first kitchen chores my mother assigned me as a little girl was to sort through the dried lentils. My job was to pick out bits of dirt, stones, and toss out the lentils with holes or cavities, the badly misshapen or shriveled ones. Mamma would place the lentils in a white china plate, a handful at a time, and I, the “good eyes,” worked my way through full bag. I’ve since passed that chore over to my little boy.

Next step was filling a large pot with cold water, heat it up, and toss in a carrot, a celery rib, a quartered golden onion, a bay leaf, some garlic, and whole peppercorns. You’d then add triple concentrate tomato paste (if you had it around). You’d salt the lentils only toward the end, all the while stirring with patience. The most important part of this ridiculously simple recipe is the quality of the lentils. Tiny, brownish lenticchie di Castelluccio di Norcia, simply rinsed, can make the magic happen. Leftovers remain creamy and retain some of their bite. You can warm them up, stirring with a ladle, while adding more water. Or you can eat then cold straight out of the fridge. I intentionally make large quantities to allow for tiptoe midnight snacking.

My heart breaks at the thought that Castelluccio di Norcia, the hilltop town in Umbria surrounded by gorgeous plains of rainbow lentil groves, is now little more than a pile of rubble. Two late August earthquakes (2016 was an awful quake year) hit Apennine mountain villages very hard. The devastation razed Castelluccio, among others. Purchasing local products can help the economy of the damaged areas. If you want to help, there’s a website listing local producers that need help clearing their warehouses, including lentil farmers.