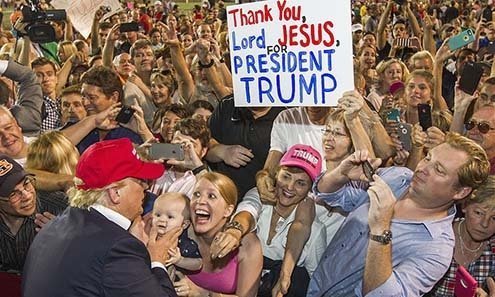 The Trump-Clinton race produced a cauldron of feelings.
I

n a a previous column, I suggested that some children are induced to think that “negative” emotions — whether sadness, anger, neediness or indignation — are unacceptable and to embrace them can lead to rejection by their parents, the very people from whom they most in need acceptance. They go to their parents for comfort and come out ridiculed as cry babies or are punished and isolated through “time outs.”

Over time, these children — called “avoidant” by researchers — become adept at concealment, pretending to stay calm when left alone, even though they might be terrified.

This pretending, in adolescence and adulthood, can erupt into bullying, aggression and outright hatred toward those who show need or appear weak. Avoidant adults may be inclined to follow leaders who are even worse bullies than they are. The deal with the pain, sadness and outrage of others dismissively (“whatever”) or with aggressively verbal gut punches (“Get over it!” or “Suck it up!”)

They also give immense importance to “winning,” which emerges in the form of hate speech, racism, sexism, and other efforts to boost a vulnerable self. The recent U.S. presidential race bluntly illustrated this kind of dismissive aggression. Many were outraged as teeming masses of people seemed to go along with a hate campaign that worked against their own interests. It was sad to watch as people gave into feelings of hatred when it was their own weakness, sadness or disenfranchisement they wanted at all costs to forget. They behaved like a collective version of the little bully who’s trying so hard not to cry that he makes others cry first.

My own dismay was double. I felt for the object of this cold and bitter rage and also its subjects, people who felt they had to stifle empathy and humanity at all costs. I can only imagine what they must have endured at a tender age.

But understanding the context didn’t make it any easier to swallow.

In his 1994 book “Becoming Attached,” psychologist Robert Karen titled a chapter “Avoidant society,” suggesting American social values were now all but defined by material success. Society was built around “winners” and “losers,” the winners seen as those with the most money and the toughest disregard for feelings, their own or those of others.

The children of this society were pushed to be “independent” well before they were ready, their lives rigidly organized, CEO-style, down to the minute. They had less time to play, to hang out, to just goof off. There was no time for feelings.

Contributing to the push was the numbers machine — standardized tests, GPAs, points gained for extracurricular activities — and the competitive pressure placed on kids to climb to the top (even at the expense of others). The ever-increasing workload on parents set aside the seemingly small needs and fears of children. Comfort had become scarce. Children were urged to grow up too soon and become “winners.”

The “losers” were left by the wayside as crybabies. Avoidant children at age one become class bullies at age seven. They tend toward spiteful and gratuitous acts of violence. As adults, their dismissiveness becomes a set pattern.

It’s hard to empathize. But if we don’t, we’re little better than the bullies.

While a political campaign based on hate speech and the narcissistic manipulation of disenfranchised voters may make our blood boil, we owe it to ourselves to ask questions. What made these people blind to their own needs and ready to capitulate readily to the explicit and implicit hatred featured in their leader’s campaign? How were they manipulated? That question, at least, can be answered. They were made to believe that those worse off than them were the “losers” and as such deserved the sort of scorn that made them feel more like “winners.”

Unfortunately it’s a dead-end game. Everyone loses. If we can hold our outrage long enough to understand the motivations — of both the followers and the leader — perhaps we can make it right next time around.