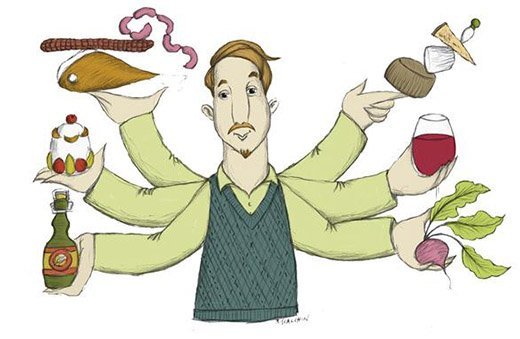 Gourmet gaffes are inevitable if you have lots on your mind's plate.
E

ven a seasoned cook — and yes, I’d been waiting for a chance to spring that pun — has kitchen moments that are best forgotten (or made into comedy shows).

If you’ve been cooking for decades, and mine are piling up, you’ve probably put most of your gaffes under lock and key. Who wants to hear about failures?

I choose to remember my own mishaps to help others come to terms with cooking’s steep learning curve. No one serious about food escapes mistakes, or should.

Some blunders are X-rated catastrophes, while others qualify as just plain dumb errors you could have avoided had you thought everything through more carefully before you got started. I’ve known both kinds.

It’s almost gratifying to think that a bit of my DNA became part of the universe.

Once, I offered to take panzanella, a favorite for large gatherings, to a luncheon across the street. In a rush to finish, I used my carrot peeler to cut thin slivers of cheese from a wedge. Zip, zip, zip went the lovely planes of Parmesan and zip went a small piece of my index finger — into the bowl.

Just try to find an infinitesimal morsel of yourself (specifically a slip of heavily calloused skin) in a cubed mix of rosemary focaccia, and even smaller bits of tomatoes, not to mention fresh mozzarella, shredded basil, coarse salt and pepper.

But hey, I had washed my hands first. Plus, these were dear friends and I was certain they would never find it. And even if someone did, that someone, knowing me, might say, “Wow, you really gave it your all!” Which they wouldn’t, of course. In retrospect, it’s almost gratifying to think that on that particular afternoon, a very tiny molecule of my DNA became part of our great universe (and a highly edible lunch).

Early on in my cooking adventures, as part of an inner trial run, I decided to make every recipe contained in the first two years of “Gourmet Magazine.”

This included Canard montmorency, roast duck with fresh cherries, onions, carrots, cherry brandy, which I prepared as my piece de résistance to impress a dinner party of eight.

For the occasion, I dressed in a long white crepe gown whose low back I strung with (fake) pearls. But as I came out of the kitchen with my glorious platter I tripped on the hem I should have shortened. This sent the duck flying into the plate glass window of our dining room while bathing me in the sauce. I looked less like a hostess and more like a vampire’s first course.

But this was nothing compared to what was to come after I had dusted off wounded ducky and replaced it on the table. Said table, a very large Spanish item whose lip hid the guests’ laps, could not possibly cover the fact that everyone at the dinner table, except my husband, was naked.

And very likely spaced out. But fortunately, in those young and easy days, one policy was sacrosanct: never let the cook get stoned. Since my guests very much were, I could discreetly grab six over-sized linen napkins and politely drape each guest’s lap to protect them from further doses of rogue montmorency sauce.

Despite all this, the slate floor remained clean. We were also lucky in that we hadn’t acquired any pets — unless you count the monkey I was monkey-sittting for a week. It ate every one of the bananas I’d intended to flambé.

The saga goes on, but I’ll save the details for another time.

I will suggest that if you’re ever invited to someone’s home for an elaborate duck dinner, consider a full-body condom as proper dress. At least that way you’re not naked.

Oh, and if the cook announces she’s got a monkey in the house, send your regrets.