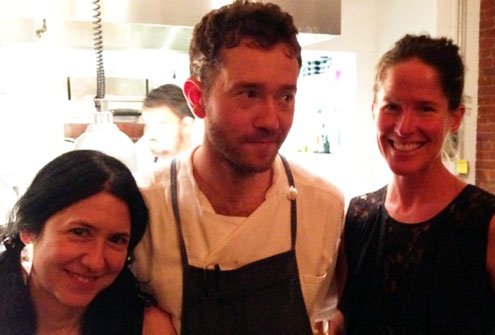 n a cold night in Boston I took a wine tour of Italy at a restaurant called Asta, the brainchild of young partners Alex Crabb and Shish Parsigian and a recent entry into the local dining scene. Though the name might sound Italian, chef Crabb has actually put together menu that feels more like kilometer zero/”natural” American meets elegant French cuisine. As for the origin of Asta, it’s both an acronym for “Alex and Sish’s Taste Adventure” and the name of Myrna Loy’s fox terrier in “The Thin Man” — take your pick. The partners like both roots.

My recent night at Asta was all about adventure. Sommelier Paige Farrell expertly suggested Italian wine pairings (by the glass) for each course of a three-course prix fix menu. The idea was a wine tour of Italy from afar.

First up was Foradori Manzoni Bianco IGT 2011 (€15-20), which turned out to be my favorite. I met producer Elisabetta Foradori a few years ago and visited her winery nestled between cliffs in the Campo Rotaliano, the old flood plain of the Noce River south of the city of Trento. Foradori’s flagship red is made from the native grape Terodego. In 2007, she bought vineyards in the calcium-rich clay hills above the city, growing native varieties Nosiola and Manzoni Bianco to make single variety white wines.

Since Foradori’s wines are made outside these DOC zones, they are classified as IGTs, Indicazione Geografica Tipica. Originally established in the 1990s to acknowledge the rise of the “Super Tuscans,” IGT gives producers creative latitude in making quality wine in a given region using non-local grape varieties. (The original Super Tuscans, for example, were made in Tuscany with Bordeaux grape varieties; many now many have DOC status.)

Foradori growing methods are biodynamic — a sort of “super organic” method that begins with enriching the soil — and she rarely intervenes in the cellar. For Manzoni Bianco, she leaves the wine “on the skins” for two weeks, producing its deep, blonde color and complex aroma and taste.

Color aside the wine wasn’t heavy or sweet. Instead, it was crisp, delicate and slightly aromatic, light enough to pair with a first course mixed green salad but structured enough to accompany heartier fare, including fish or chicken.

The second wine, Cantine Antonio Caggiano “Tari” Irpinia Aglianico DOC 2011 (€14-17), was also a single varietal, made from native grape Aglianico. (The Greeks probably brought it to Italy — aglianico is derived from ellenico, the Italian word for Greek).

Taurasi, a town in the volcanic hills of Irpinia about an hour northeast of Naples and Mount Vesuvius, is Aglianico’s hub. Former architect and photographer Antonio Caggiano began making wine there in 1993 with the help of French-trained Luigi Moio. Caggiano’s wines are aged in small French barrels, barriques, which soften the robust tannins inherent in Aglianico, allowing the wine to be consumed sooner.

“Tari” (confusingly know as “Tauri” everywhere but in the United States) is Caggiano’s entry-level wine. It spends less time in barriques than his flagship cru, Taurasi Vigna Macchia Dei Goti DOCG. Paige paired it perfectly with a second course of lamb and vegetable stew. The wine was still young, with a tannic bite, its complex flavors complementing the lamb’s hearty taste.

Finally came Albino Rocca Moscato D’Asti DOCG 2011 (€17-20) from the Albino Rocca winery in the Piedmont town of Barbaresco. The winery and the town are famous for full-bodied reds made from native Nebbiolo grapes, but this wine is at the other end of the spectrum. I’m not normally Moscato or Moscato D’Asti fan, in part because there are so many sickly sweet versions of fizzy wine made from the Moscato grape in Piedmont. But Albino Rocca produces only a relatively small quantity of quality wine, all from grapes in one 3.5-hectare (8.6 acre) vineyard near the town of Alba. Its playful, delicate flavors were a nice foil for the dessert course of cheesecake with blueberries and peanuts.

The wine and food pairings of the evening reflected Asta’s overall balance. It’s chic but doesn’t work too hard to impress. The staff is friendly and attentive, but not too “familiar” (I’m always taken aback when American wait staff repeatedly comes by to ask “How are you doing?”) Crabb and Parsigian are serious about quality, but also easy, fun and vivacious.