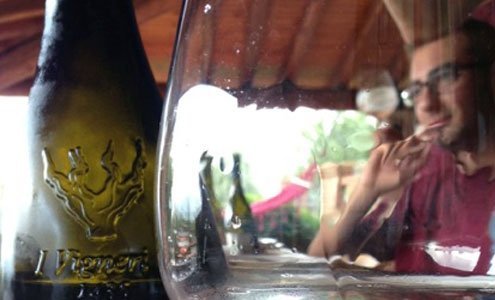 hen people ask if I have a favorite wine, I typically respond that it’s hard to name one because my favorites change with place, season, weather, time of day, food, and the people I’m with.

But I do play favorites when it comes to wine memories. Here then are some memorable wines — it’s summer, so I’ll start with whites — and the indelible moments they bring to mind.

¶ While visiting from the United States, my sister wanted to go to Tuscany. After obligatory sightseeing in Florence and Siena, I took her to Monte Amiata, an extinct volcano south of Siena, to stay at Il Silene in Seggiano, which has an extraordinary restaurant and six rooms.

Sitting by the fire in the evening, owner and chef Roberto Rossi suggested we try Loris Follador Case Coste Piane Valdobbiadene Prosecco DOCG, a “natural” prosecco that spontaneously undergoes a second fermentation in the bottle. Unfiltered and cloudy, it looks unlike any prosecco you’ve had before, and the same goes for its delicate aromas and taste. It’s light (11 percent) and crisp but has a special soulfulness that matched the special evening with my sister.

¶ On a hot summer afternoon a couple of years ago, a friend took me to Montenidoli, Elisabetta Fagiulo’s vineyard on a hill overlooking the towers of San Gimignano. She showed us soil with fossilized shells, a remnant of land that was once under water. After standing in the cool silence amid her highest vines, we went to the cantina next to her farmhouse where she poured wine and sliced prosciutto and local cheese. Her husband Sergio, in his 90s, read poetry. That evening Elisabetta’s rich, soft, harmonious Carato (Montenidoli Vernaccia di San Gimignano “Carato” DOCG), aged in wood, seemed to fit mood, moment and place. Sergio died just a few weeks later.

¶ When I first visited Sicily’s Etna volcano, Salvo Foti, a leader in renovating antique terraced vineyards and in bringing back traditional winemaking techniques, took me to his Vigna Bosco vineyard on the 1,300-meter northern slope of the volcano. The vines there a mostly a century old and are a mix of native white and red varieties. Foti vinifies them together to create Foti I Vingeri Vinudilice Rosato IGT, an unusual rosé.

We opened a bottle over lunch at his farmhouse, which sits in the midst lava remains and rock walls. The roots of the vines run deep in volcanic soil, giving the wine a distinctively crisp minerality followed by layers of subtle aromas and flavors.

But that wasn’t my only memorable Etna experience. Cirò and Stephanie Biondi’s two vineyards are on the volcano’s eastern slope, facing the sea at 600-700 meters. Le Vigne Biondi Chianta Etna Bianco DOC cru (single vineyard wine) is made exclusively from grapes that grow in the Chianta vineyard where most vines are more than a half-century old. The main variety is the native Etna grape Carricante, which flourishes on the eastern slope.

Ciro and Stephanie walked me to a covered stone terrace built halfway up their Cisterna Fuori vineyard. There, we tasted the wines — tinged with the salt of the sea and the mineral-rich soil — as the shadows lengthened, relishing the ancient silence of the place. I won’t forget that day anytime soon.

¶ I arrived at Omero (Homer) Moretti’s estate near the hill town of Montefalco for a vineyard visit, but by the time I left Omero, wife Daniele, daughter Giusy, and the grandmother, whom everyone simply called La Nonna had made me into family. I walked with them through their vineyards and cantina. I saw the family’s 1,000-year-old olive trees and escorted Omero to the press where his olive oil was being made that day. Daniele accompanied all the wines he served with fresh bruschetta, and I ended up having lunch at La Nonna’s house.

The wine he served was Nessuno (Omero Moretti Nessuno Umbria IGT), which is how the Homeric Cyclops responded — “nessuno” means “nobody” — when wanderer Odysseus asked who was in the cave. Omero puts a quote from “The Odyssey” on each of his wine labels.

Wine is place, wine is history, and maybe most of all, wine is memory.