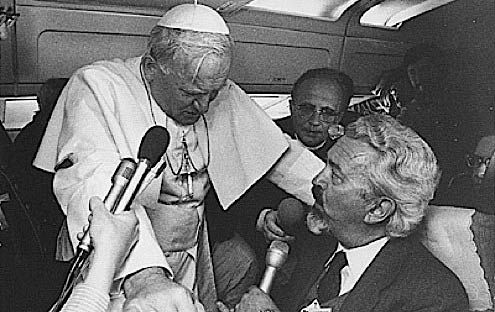 Wilton Wynn was Time magazine’s bureau chief in Italy when Pope John Paul II was elected in October 1978. He was also the magazine’s leading Vatican expert for two decades, reporting on four popes. Before and during his Rome assignment, Wynn worked extensively in the Middle East, covering the signing of the Camp David peace accords. He was a consultant for Time when the magazine named the pontiff as Man of the Year in 1994. He is now retired and lives in Rome, where Peter Simek interviewed him on the possibility of a Third World candidate ascending to the papacy. These are excerpts from their conversation.

Does Italy in general still see the papacy as something specifically “Roman”?

No. I think overall they [the Romans] would be accepting. They were awfully good accepting this Polish pope I thought, of course that is quite different from a black man.

Fans of soccer teams such as Rome’s Lazio have a reputation for racial intolerance. Is it indicative?

That is a type of hardcore hooliganism. They don’t represent the real Italy. It is a fringe group. I think if there was a black [pope] … there would be some nastiness towards him from those kinds of people.

How do you think the Italian press would handle a black pope?

[They] can be terribly irreverent sometimes, often making fun of the pope in cartoons, and I would imagine that they would have a good time … The press would probably come up with some rather irreverent cartoons about him, but thinking of it as fun and not as vicious.

Do the political correctness and the taboos in U.S. culture keep us from seeing the “fun” or insincerity of the Italian attitude towards race?/b>

I haven’t lived in America for more than fifty years so I am a little out of tune. But I had a niece here from Florida a couple of years ago to visit with her mother and father, and I was telling a story about my father (their grandfather), and I was quoting him talking about the “niggers” down in Louisiana. When I said that word, [she] had an instant reaction, though it was not from me, but in the anecdote I was telling. You don’t have anything like that here. They haven’t had the problems as intensely as we have, and so there wouldn’t be that taboo. Sometimes in recent years, I have seen commercials on Italian TV showing blacks like old fashion minstrels, blacks with big lips singing. So the pope wouldn’t be protected the way he would be in America. But then again I think it would really be in good fun, not viciously.

Since, historically, the pope has been a world figure for Italians, is there any desire among Italians in general to bring the papacy “back to Italy” so to speak?

I would say the yearning for regaining the papacy for Italy is mostly among the bishops and the cardinals. I just don’t get that feeling from the Italian public. Italians are not chauvinistic, they are not nationalistic like the French are or the British. … There is no such thing here as the patriotism in the French — Vive la France! and all that. There is a lot of campanilismo, loyalty to their lineage, town, village, or region or whatever, but to the state of Italy it is not that intense. That is one reason why I don’t anticipate a great disappointment [for a non-Italian pope].

Do you think the papacy, the pope, matters at all to the younger generations in Italy. Is it something they think about?

In general, I would say no. You have Christian youth movements here, and that is a slice of Italian life that probably cares. …But Italian youth is increasingly secularized, like France and Germany. I think there is a growing indifference to religion in general, with a narrow interest in the Vatican, without great enthusiasm. I have the feeling that Western Europe is really becoming de-christianized at an accelerating pace.

Even in the EU, where the recent constitution made no reference to Christianity as a foundation for the formation of Europe?

There was a survey done by a Jesuit sociologist about religiosity in Rome, and his conclusion was that the Romans look at the church as a public facility, like the post office. They observe the rights of passage, baptize their babies, marry in the church, have first communion, all that sort of thing. But only a very small percentage go to mass. Confession is almost completely forgotten. These things don’t really compel them anymore, but they continue doing them because it is part of their culture, though it is losing its meaning. That’s another reason why I think a black pope would be in general, accepted: Because of indifference.