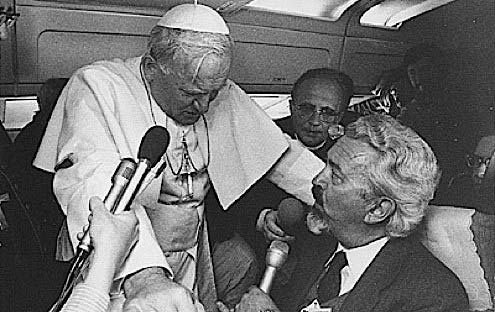 colleague and friend recently asked me to dig up a black-and-white photograph I had squirreled away among the paper secretions I horde to nourish memory. A picture may tell a thousand words, but images without words prey only on emotions, which usually tell only half a story.

So here then is a man and a pope, or more precisely two men: Wilton Wynn and Karol Wojtyla. Wojytla, the dynamic Pole who led the Catholic Church for nearly three decades, died in 2005. Wynn, an Arkansas gentleman-journalist who covered Italy and the Vatican in the 1980s, went his way in April. Wojtyla is on the fast track to sainthood. Wynn was mourned quietly by friends and admirers. Both men endured well past their primes.

Unlike the pope, whose home and office are on the fancy side, Wynn was my neighbor. Before his health deteriorated he’d take a daily walk, shuffling ahead like a lanky southern mandarin with a cane. From time to time we’d meet and chat. Few men were as gracious.

Wynn belonged to a generation that “new media” has inadvertently extinguished. He was a full-time foreign correspondent who made it a point to live abroad and merge into a host culture in the service of insight, which he knew was best when gradually acquired.

His limelight employer was Time Magazine, an institution that formed the backbone of American weekly journalism until the proliferation of news bites and instant opinion swept it aside tsunami-style. It is now a tiny and brittle cancer patient that can do little more than whisper.

For most of the 20th-century, Henry Luce’s Time was big, conservative, self-important, and almost despotically monopolistic. Wynn worked in Egypt, where Anwar Sadat confided in him. He later ran a bustling Time office in Rome that once hosted talk-of-the-town parties. The journalistic part of the festivities involved mingling and, when possible, befriending political and entrepreneurial loose lips. The few correspondents who chose not to depend on domestic news agencies prized such inside voices, putting them ahead of the academics who would later become mass media’s talking heads. Few handled the burrowing process as deftly as Wynn. He was likeable, trustworthy and profoundly discreet.

Such discretion, Wynn and I agreed, had all but evaporated, swept away by the vital centrality of impatience, into which loyalty just didn’t fit. Meticulous, deliberately anti-vulgar men like Wynn believed that even corporations should play common rules, and did.

It’s hard to insist that graciousness and doggedness need not exclude one another in a journalistic culture that has chosen to return to louder, more adversarial roots. Sarcasm, irony and sensationalism fueled early Yellow Journalism on both sides of the Atlantic. Its mud-slinging emotionalism helped produce two world wars.

These days, essayists tend to pillory Time for once having honored both Stalin and Hitler as “Man of the Year” (Hitler in 1938, Stalin in 1939 and 1942). But revisionist anger is typically illogical. Both leaders were once ambitious hell-raisers who supplied a considerable amount of news at a time when American correspondents were out in force trying to make sense of interwar nationalism, as furiously exciting as it was troubling.

To be sure, the pace of overall understanding was slower, both a shortcoming and blessing. On the one hand, the dastardly was less immediately evident; on the other, correspondent precursors to Wynn had more time to think before they wrote, and editors more time to ask questions before incendiary copy hit print. This helped rein in the tyranny of first-impression journalism that has loudly returned to pre-eminence.

Wynn and Wojytla, the southern gentleman and the Polish proselytizer, both polite but stubborn men, were ideally matched. When the pope ventured into the passenger cabin during trips abroad — cabins packed with chain-smoking journalists — he’d often pause to speak to the Time correspondent. Their relationship would profoundly move Wynn, a Baptist, but that’s another story.

My friend loaned me the photo of Wynn and Wojyla for use in a magazine portrait of Wynn published in 1992. I promised to return it — Wynn himself wanted it back — but time can be like an unanswered letter, a slave to guilt, which in turn generates further postponement.

Yet the photo remains an amulet. It reminds me of a kind and serious man who went about his work with charm, focus and ferocity, minding his manners, picking his fights, and swearing by an evenness of tone that these days would be seen as insufficiently brawl-like.

Those qualities — which together represented the best of objectivity — gave a short season of journalism its best moments, with men like Wynn at the source of its respectful determination.