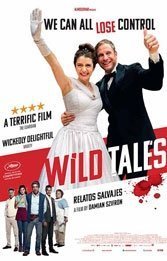 Argentine director Damián Szifron wickedly brilliant “Wild Tales” (Relatos salvajes in Spanish) uses six unrelated stories and an ensemble cast to illustrate the humorous and devious breakdown of civil society. A thwarted musician tries to settle a score with critics on an airline flight; a young waitress recognizes a lone diner customer as the man who provoked her father’s suicide and plots revenge with the cook; jalopy driver Mario blocks a sleek businessman Diego from trying to pass him on a country road, leading to a battle of mythic proportions; an explosives expert spends the day demolishing a building only to find his car towed away after he’s stopped to pick up a cake for his daughter’s birthday; madcap events ensue.

Revenge is often the motif, and its triggering can produce results that are at once primordial, violent, futile, and silly. In each of these stories, one thing inevitably and unpredictably leads to another. A brash and glitzy wedding comes undone when the bride discovers a rival among her groom’s colleague. Sweetness shifts to dark side overdrive and in-laws join the brawl.

Daily life and commonplace rituals are easy prey to cathartic violence whenever society drops its guard, with small occurrences easy prey to anger, and anger to barbarism. The veil of social civility is fragile indeed, and these delightfully dark morality tales take no prisoners.