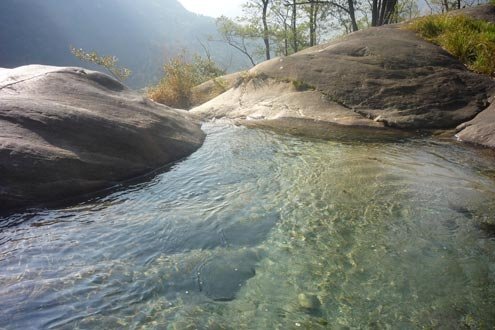 Stream pools ahead of the Acquafraggia Waterfalls. Photos by Andrea Smith.
T

he Acquafraggia waterfalls spill down grey granite in a series of cascades. Rocks force waters to unite, only to separate them again into torrents and streams. The name Acquafraggia derives from acqua fracta, fractioned or divided water. The final fall is a double cascade that plunges 170 meters, creating fine mist and a rainbow in the meadow below. The Lombardy region declared Acquafraggia a protected area in 1984.

My husband Marino and I stand in the meadow under Acquafraggia’s spray, listening to the thunder of the falls on a cool October morning. We’re about to climb a mule trail to Savogno and Dasile. These are mountain villages with dazzling Alpine views but without roads, uninhabited after 1967 but never abandoned. We’ll circle back along the falls on the Panoramic Path.

We’ve driven 121 kilometers north from Milan on highway SS36 to the town of Chiavenna near the Swiss border. Signs for San Moritz and highway SS37 direct traffic into the Bregaglia Valley. At the village of Borgonuovo, four kilometers east of Chiavenna (not Borgonovo, Switzerland, which is 14 kilometers up the valley), the sight of the falls on the left guides the way to Acquafraggia Park. With its café, picnic tables, shady trees and parking lot, it’s a popular spot for families. The falls have attracted tourists for centuries.

Leonardo da Vinci, as the Duke of Milan’s engineer, traveled to Chiavenna to inspect the town walls under construction in the 1490s. In his “Codex Atlanticus” he described the surrounding valleys with their “high and sterile” mountains full of wildlife including “terrible bears.” While there, he journeyed up the Mera River in Val Bregaglia. Of the Cascate dell’Acquafraggia, he said, “there are waterfalls of 400 cubits [about 180 meters] which are an attractive sight.”

Guidebooks became more effusive in the 1700s, describing the falls as beautiful and comparing them to nearby falls at Gordona and Pianazzo, sacrificed for hydroelectric power 50 years ago. An 18th-century traveler wrote “the surrounding ground is constantly dampened by spray and people who stand near Acquafraggia are soaked by the droplets in a few minutes.”

Thanks to this spray, an uncommon fern, pteris cretica or cretan brake, grows in its most northern habitat. Allium ursinum, known as ramson or wild garlic, is also present.

We begin our hike at the parking lot (400-meters) located near the falls. An asphalt road turns into a path between houses. On the left, a large sign and map mark the start of the trails. We take path B25 on the right. It’s a steady, two-hour climb of 2,886 stairs to Savogno (932-meters) and then another half hour to Dasile (1,032-meters).

At the fork, we keep left, continuing a lovely ascent through woods to Stalle dei Ronchi (590-meters), where we find stone ruins of barns, three stone water troughs, and a wooden wine press dated 1706. Here, Savogno inhabitants cultivated chestnuts and vineyards. Shepherds stopped to rest and watered their animals on route to high alpine pastures.

From Stalle dei Ronchi we keep left on trail B25 and climb to 720 meters where trail B31 from Pigion joins our path. We rest on stone seats before continuing to Savogno.

Savogno is a surprise. For a roadless, mountain village, its 15th-century houses are large and austere, while maintaining the Alpine charm of stone buildings with their wooden balconies and decorated doors. They speak of a rich past. The ex-elementary school is now a hostel and popular restaurant, Rifugio Savogno.

The church and bell tower date from the 1400s — new in Leonardo’s time. Today, a banner depicting Luigi Guanella (1842-1915), who was a priest here for eight years, flaps in the wind over his statue in the church courtyard. Tomorrow, Pope Benedict XVI will canonize him in Rome. Born nearby in Val Spluga, Guanella founded three charitable institutes.

Behind Savogno, a trail ascends to high pastures and Lago di Acquafraggia (2,043-meters), a lake formed by the Acquafraggia stream whose source is Pizzo del Lago (3,050-meters). The path continues to Lei Pass (2,660-meters), past a watershed where waters flow to the Mediterranean, Black and North Seas. It concludes in the Rheinwald of Switzerland.

After exploring Savogno, it’s on to Dasile. We cross the bridge over the Acquafraggia stream and follow the path. A gate demarks both territorial separation and the hatred between the two villages, initially caused by Savogno’s shunning of Dasile during the 1629-1631 Black Plague (mentioned in Alessandro Manzoni’s “I Promesi Sposi“).

Dasile’s houses are simpler. They sit back in a large meadow. We sit on a bench on the balconata, a terraced ridge that drops to the Mera River on the valley floor. Chiavenna spreads to the west. The Bregaglia range of the Western Bernina Alps rises straight ahead. They nourish the spirit. Many cubits high? Yes. But not, as Leonardo suggested, sterile. Donkeys bray. Wagtails flit by. The sun warms. It’s hard to leave.

We return to Savogno. Twenty minutes down B25, we pick up trail B31. The path and sound of the rushing torrent lead us through woods to where water swirls and pools on worn rock before wildly flowing through narrow slides and cascading down the mountain. We follow the Sentiero Panoramico (Panoramic Path) descending beside the falls, crossing a suspension footbridge and then climbing down tedious metal stairs to where our walk began.

In the meadow, an artist paints by the falls. A huge umbrella and heavy coat protect him from the spray. Leonardo would have approved.

Notable sites: Piuro, for its museum documenting the 1618 landslide; Prosto, for its famous butter cookiesl Gordona, for canyoning on the Boggia River.