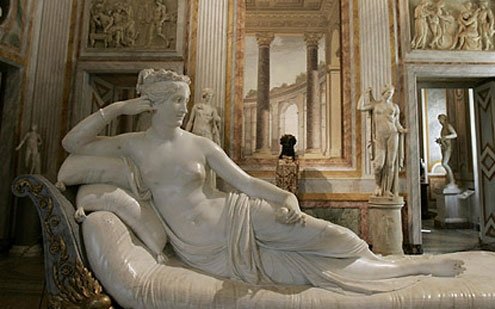 Given Pauline’s licentious lifestyle, going with the Greek symbol of love and sexual desire was scandalously apropos. Since the Borghese claimed descent from Venus, Canova’s 1805 sculpture bestowed a sort of divine flattery on the illustrious Roman house.

But Canova’s “Venus Victorious” also represented a particularly lusty blurring of the intersection between art and life. Pauline’s naked breasts and supple flesh in come-hither recline were a vision known to legions of men before it was put on public display, albeit briefly.

History remembers Napoleon’s petite soeur as a spoiled and vain libertine, a fashionista, sybarite and nymphomaniac with dubious maternal instincts. As her eight-year-old son lay dying in Florence, she luxuriated in Lucca. Pauline unapologetically gobbled up men, splendid clothes and possessions with fire and caprice.

As if war wasn’t enough, Napoleon had the exasperating Pauline, who matched him in temper and looks. He did everything in his power to indulge and protect her, including marrying her off at age 16 to one of his generals, Charles Leclerc, after catching the lovers rustling behind a curtain in flagrante delicto.

In 1801, Pauline and their son Dermide accompanied General Leclerc to Saint-Domingue (now Haiti) on orders from Napoleon to restore order to the rebellious French colony. While Leclerc tended to mutiny, Pauline tended to lovers that she plucked from the locals and the French army. Nonetheless, when Leclerc died during a yellow fever epidemic in 1802, the grieving widow chopped off her lustrous locks and sailed his remains back to France.

Mourning was swift. Eight months later, in August 1803, Pauline married Camillo in another marriage brokered by Napoleon. He hoped marriage the marriage to an Italian lackey would dampen hostilities in French-occupied Italy. Camillo, 6th Prince of Sulmona was among richest men in Europe, but showering Pauline in Borghese diamonds did little to mask the fact that he was a raging bore.

The couple settled into the Palazzo Borghese in Rome, but Roman society disenchanted Pauline and Camillo’s underwhelming libido was nowhere up to her concupiscent snuff. Scandalized by Canova’s half-naked portrayal of his wife and humiliated by her adultery, Camillo locked the sculpture away and imposed a stint of house arrest to exorcise Pauline of her bacchanalian ways. But such drastic measures were to no avail and Camillo moved to Florence and took a mistress. It would take Pope Pius VII to reconcile the couple 10 years later (ironic since the pope had excommunicated Napoleon who, in turn, had him imprisoned).

In Camillo’s absence Italian actor Talma played suitor, reading her Molière. Chateaubriand secretly sent gifts in Rome. Her lover, the painter and intellectual Nicolas de Forbin, was made her Chamberlain. Blangini, Paganini and Alexander Dumas’s father were all acquainted with Pauline’s intimate charms. In her 2010 biography, “Pauline Bonaparte: Venus of Empire,” Flora Fraser even alleges that Pauline committed incest with Napoleon. Empress Josephine, Napoleon’s wife, was certain of it.

But all of this juicy tabloid fodder overlooks the circumstances that forged Pauline’s behavior. Her father, Carlo Buonaparte, died when Pauline was five, leaving the family impoverished. Her brothers were constantly away at war, and the family lost everything again when their home burned down during the British invasion of Corsica in 1793. The Buonaparte family fled to Marseille in France where a girl named Maria Paoletta, 13, illiterate, and struggling with her blossoming beauty, became Pauline Bonaparte overnight.

Of course Pauline was mercurial, impetuous, reckless, out of control. Her early years were a nightmare of instability. She came of age watching her brother deal with the aftermath of the French Revolution. Rebellion was in her blood.

But she paid a high price for her indiscretions. Two of her most notorious extravagances — using servants as literal foot stools and requiring them to chariot her to and from baths of milk — were probably the result of stabbing abdominal pain she suffered from salpingitis, an inflammation of the fallopian tubes brought on by venereal disease.

Of all Pauline’s men, Napoleon was the only constant. After all the nepotistic spoils he had heaped on his siblings, only Pauline visited him in exile on Elba. She had been independently wealthy since selling the duchy of Guastalla, a gift from Napoleon, to Parma for six million francs, and she liquidated the rest of her assets to support her disgraced brother financially. She encouraged his return to power while throwing parties and balls on Elba to help bolster his spirits. When Napoleon was captured after Waterloo, her Borghese diamonds were found in his carriage.

Pauline died of cancer at age 44 in 1825. Ahead of death, she wore her best dress and reassured her mirror image: “I am still beautiful.” She is buried with popes and princes in the Borghese family vault at Santa Maria Maggiore in Rome, across town from the Borghese Gallery, where Canova’s “Venus Victorious” is on display.