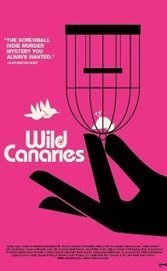 It’s easy enough to make bad movies. Making a bad screwball murder-mystery takes special skill, since screwiness should have the funny part covered. But writer-director Laurence Michael Levine doesn’t get it. Noah (Levine) and Barri (Sophie Takal) live together in Brooklyn along with a third-wheel lesbian named Jean (Alia Shawkat). He’s a broke 34-year-old who thinks his sperm is going bad; she’s a nosy goof who behaves like an adolescent; roommate Jean is a typical instigator. When their neighbor’s aging mother dies of a heart attach, manic Barri becomes convinced her peculiarly wooden son Anthony (Kevin Corrigan) murdered her to cash in on a life insurance policy. “Acting weird is not a crime,” says a friend, but that’s hardly enough to deter Barri and Jean, who decide to traipse around on Anthony’s trail, soon also coming to suspect landlord Damien (Jason Ritter). Meanwhile, Noah is busy commiserating about how miserable his life is with former girlfriend Eleanor (Annie Parisse), who despite having decided she’s a lesbian appears to be back in the market for bad sperm.

The underlying idea is two semi-hysterical women convinced a murder’s been committed because, well, they’re bored. The predictable backdrop is sexual and relationship confusion. Little is interesting. Nothing is witty (a necessary screwball trait). The film’s cast never surprises, nor does Levine’s script, which builds in a painful five-minute coda to help explain what just happened. None of this does movie-making any favors.