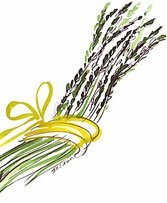 Wild asparagus improves all around it.
I

f you live in south or central Italy, chances are wild asparagus is growing in a forest near you. This unlikely treat sprouts up in wooded areas between late March and mid-May, with most of the plants found the first few times that regular sunshine follows consecutive rainy days. They grow individually and thrive near places protected from the elements, such as a tree or a rock. Curiously, they are often surrounded by prickly weeds.

I first encountered “asparagus hunters” — legs far apart with hands on knees, scouring the brush — a few years ago while on springtime bike rides in the remote countryside around Rome. Each time I’d stop to ask what they were looking for they’d hold up a clutch of thin green spears and exclaim, “dinner!”

I’ve had very limited success tracking down wild asparagus myself (in three tries over two years I’ve found enough to add up to perhaps one generous portion) but I still take every opportunity I can to buy them when they show up in my local market.

If you aren’t sure what I’m talking about, wild asparagus looks just like the domesticated version, but much thinner. The flower can also be more delicate. Slender as it is, the stem is actually less flexible than its civilized cousins’, and because it grows in the wild its flavor is far more intense and less predictable.

Wild asparagus is attractive in part because it’s only available a couple of months a year, starting around now. It reminds me of the pre-luxurious time when fruits and vegetables were available only in season.

It’s worth the wait: Almost any dish that’s good with regular asparagus is improved using the wild version. I have a few favorite recipes, but I should first point out ways in which cooking with wild asparagus is different from cooking with the supermarket variety.

Since the stems are harder (don’t buy any that are limp), the spears must be boiled to soften them before any other cooking. More important is snapping the stems correctly. To do it right, hold the spear with the flower facing your body and lightly pinch the stem. As you slowly move your fingers down the stalk, you’ll find a hard spot. At that spot, pinch your fingers together to snap the stem.

I talked to Maurizio Lustrati — a former sous-chef at Rome’s Michelin-starred La Rosetta and the head chef at the up-and-coming Trattoria Jovinelli — about what works best with wild asparagus. He mentioned some of the classics: asparagus risotto with seafood (boil the vegetables along with their snapped-off woody stems and use the greenish water to make the risotto) or asparagus frittata, with the wild asparagus tamed a little by vegetables such as sautéed onions and a bit of spice, and perhaps some pecorino mixed in.

“The secret is finding something that marries well with the asparagus without taking the spotlight off it,” Lustrati says.

Mixing wild asparagus and eggs — whether in a frittata or hollandaise sauce or diced hard boiled eggs — is a classic because the alkalinity of the eggs helps soften the pungent flavor of the asparagus. If you like that flavor try my favorite: after boiling the spears, marinade them briefly in the lightest olive oil you can find (the best light oil in Italy is Ligurian), salt, and pepper, and then grill them for two minutes on an open flame. Mamma mia, che buono!

The worst part of serving dishes made with asparagus is that it is a difficult match with wine. Asparagus is always high in phosphorus and a kind of organic sulphur, and the levels are even higher with wild asparagus. Those chemicals give asparagus the metallic aftertaste its admirers love, but it can also make wine seem bitter.

I’ve heard many possible solutions: choosing a dry, flinty white like Sauvignon Blanc that simply coexists with the asparagus, or a robust and food-friendly red such as Chianti that in theory could be enhanced by a slight bitterness. No one solution has ever won me over.

So what do I drink when my hard-earned wild asparagus is sizzling on the grill? Ice-cold beer.