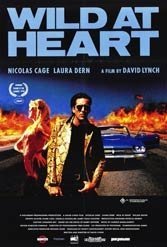 Fellini would have loved David Lynch’s faces; a malted of contortions and exaggerations meant to humble and command conventional style, which only Lynch can do so outrageously. So then: Sailor Ripley (Nicholas Cage, in his own wild years) is fresh out of prison (manslaughter) and wants back in (biblically) with his beloved, the savagely carnal Miss Lula Fortune (Laura Dern, a Lynch favorite) — never mind that Lula’s Wicked Witch mom Marietta (Diane Ladd) isn’t too happy about the reunion and puts a contract out on wisecracking Sailor.

But the kids get the better of their detractors, at least at first, and head out into the wild American yonder, North Carolina to California via New Orleans in (what else) a 1950s Thunderbird. Bats out of hell attract their own kind, and Lynch’s lurid loggia includes demented Bobby Peru (Willem Dafoe), Mr. Reindeer (W. Morgan Shepherd), Cousin Dell (Crispin Glover), and Perdita Durango (Isabella Rossellini).

Few directors would pick surrealism to spoof both soap opera and the “Wizard of Oz,” but Lynch has never played by the rules but his own. He embroiders omens for sport. Sailor and Lula are cruising pretty in the desert when they come upon a massive car wreck and find a babbling girl wandering through the detritus. Sailor’s busy hearing her out her story when her face liquefies from a hemorrhage. Road kill.

Lynch is a big kid mixing hypnotic liquids in a basement. At his crazy flawed best, and this is crazy flawed close, he’s the most compelling cinematic visionary the American screen has ever known. The doomed road trip offer one astringent taste-test after another, with Sailor’s Elvis knockoff in the middle, and either you swallow the brew whole or just walk away. “This whole world’s wild at heart and weird on top,” says Lula. You bet.