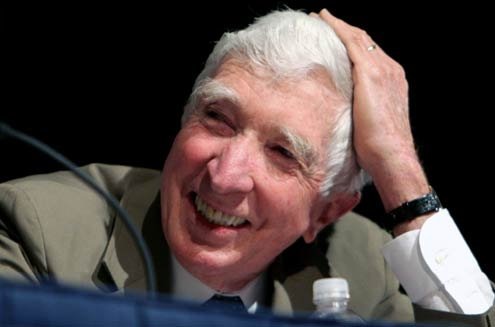 hen John Hoyer Updike died on January 27, 2009 we lost a unique American storyteller. In half a century of 25 novels and 800 (800?!) short stories, he created his own Balzac-style human comedy. Out of the most everyday Americans. Us. So how did he do it? Through chiseled prose and generous empathy. Listen to the two opening sentences from the then 26-year-old author’s debut novel, “The Poorhouse Fair.”

The story covers a one-day annual fair at a New Jersey poor-farm, when the elderly and indigenous inmates will sell their handicrafts. Visitors will come. Money’ll be earned for small treats. Unluckily, there’s Connor, the farm’s new Proctor. Who believes that rules create order, and order happiness. As commented by crotchety inmate Gregg, the old men recognize a despot when they see one.

“In the cool arch of early sun the individual strands of ospier compounding the chairs stood out sharply; arched like separate serpents springing up and turning again into the knit of the wicker work, but there are new metal name tags — these are chairs assigned in a superimposed order. ‘Putting tags on us, Gregg says, ‘so we can be trucked off to the slaughterhouse.'”

Look at the language. We start with a serpent in the farmyard. And an old man’s terror of losing final superintendence of himself. These tensions — not grand Shakespearean conflict — pull the reader to story’s end. No momentous event occurs during this sunup to sundown story. Updike’s talent lies in examining commonplace characters, to locate the joys, anguish and fears that define them

He earned his place in the big-lit pantheon of our past five decades. From the late 1950s on, we enjoyed an amazing group of “Big American Writers.” Our lamented and flamboyant author Norman Mailer is keen example of how most of these saw their roles: “one of the big guys.” Who aimed at narratives with punch. Focused on cultural obsessions, and political and social upheaval. They didn’t see Updike as challenger for top laurels in the high-seriousness caste: thought his fantastic prose wasted on minor-key characters and episodes. They, instead, felt they spoke for the nation.

But Updike felt that way, too. Only he looked at us through a very different lens. In careful, ever-freshly devised language he scrutinized the lives of your average Joe and Jane, their families and neighbors. He was quite sure that was drama enough.

To focus American lives, he used the clearly-defined precincts of Northeastern Seaboard small towns and cities. Writing in a lush weave that framed his human portraits as though they were sitters painted by Grand Masters.

One very unregal but “real” sitter was “Rabbit” Angstrom. The Angstrom series captivated readers by the very ordinariness of his life, and its un-progress. High-school basketball star Harry marries his sweetheart and gets a job demonstrating kitchen appliances in a local shop. One day, at 23, Harrry realizes that his present is his future.

In “Rabbit at Rest,” the fourth Angstrom book-coming four decades after the first — Harry’s an unfaithful, abusive husband, and salivating glutton. He feasts on cream-oozing pastries and sees his granddaughter’s hair as “long golden strands of pasta.” Fifty-five, in Florida retirement, his life has already come full stop. But — unknown to Harry — he’s gained a huge readership. Composed of men and women who know plenty of Harrys in their own towns. And deeply fear such failure of the American Dream. Fear all the minutely accumulating missteps that can destroy.

As they nearly devastate young Ahmad Mulloy and the Lincoln tunnel in this author’s final work, “Terrorist.”

Make no mistake: this novel absolutely stands out as the sole American fiction that convinces us we don’t need Taliban-trained high fliers to destroy us. That can be achieved as by-product of our ghetto streets. Where a multi-ethnic, native-born slum kid turns terrorist tool. In poverty, lacking any self-definition, he’s easy convert for a run-down imam with a few pseudo-revolutionary contacts. Who give him a goal. Suicide bomber, going to blow up the Lincoln Tunnel.

What might have happened doesn’t. What counts is that Updike has registered the insidious prophetic bluster, and the urine-stained streets. Examined how our towns and cities can produce plenty of homegrown terrorists

That was Updike’s job. To help us see the casual afternoon adulteries, and the serpent curve within our wicker chair. He recorded a half-century of America.