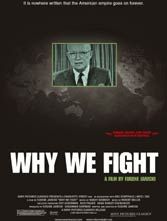 Eugene Jarecki’s documentary is a skillful if biased accounting of American militarism over the last century. We fight, Jarecki proposes, because we can, and because it serves the big business interests of the many and the imperialism of the few. September 11 was only the latest excuse for miscreant foreign policy.

You can expect this kind of record when the late Chalmers Roberts and Gore Vidal, eloquent critics of American intentions, form the backbone of the early narrative. Roberts, who covered the Cold War and the Pentagon Papers for the Washington Post, speaks of “blowback,” CIA jargon for anti-Americanism brought about by clandestine acts against regimes perceived as hostile. Vidal says, “We have a blank. We have no history,” which is to say leaders take advantage of an ignorant or misled citizenry. Former President Dwight Eisenhower, the conscience Jarecki narrative, is said to have loathed the atomic bomb and opposed its dropping — Vidal again is the source. His 1961 warning of a coming military-industrial complex is a prescient leitmotif. If neo-con propaganda is percussive, its liberal counterpoint is self-fulfilling.

But for viewers unaware of the pervasive connection between commerce and militarism, Jarecki opens a more provocative portal than counterpart Michael Moore. As a manipulation (with music-video pretenses), it does a good job in exposing another one: the Bush Administration’s media-duping regarding Iraq.

The title is borrowed ironically from Frank Capra, who made a series of World War II military propaganda films called “Why We Fight” (It’s worth observing that Jarecki’s talking heads fail to note that most American politicians were mostly peace-mongers, wanting no part of Hitler or Tojo until Pearl Harbor made the enterprise palatable.)