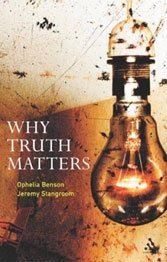 By Ophelia Benson and Jeremy Stangroom

The authors have written a concise book around a single, big idea: that truth exists; even if we can’t always detect it, it’s there, and it matters.

They are quick to point out that truth is not always beauty, as Keats’ adage has it. In fact, truth is often the kind of stuff we “just say no” to. “Auschwitz, Lidice, Cambodia, My Lai, Srebrenica, Rwanda – ,” they write, “for each place name there is an exact number; for each corpse there is a history. And there is nothing remotely beautiful about it.”

But this book is not just about historical truth, attacked and denigrated by Holocaust deniers and Afro-centrists whose political agendas require “alternative” truths to those of impartial inquiry and empirical evidence. It is also about intellectual truth. It is a prolonged quarrel with postmodernist theory, the defining academic stance of the last few decades, and one which has done more than any other to blur the line between truth and “truth”.

A skeptical problem lies at the heart of postmodernism. Skepticism is a tool for stripping away nonsense. It works decidedly well when looking at religion, the paranormal and like matters. It helps us arrive at the truth, or to get as close as we can. If new evidence appears, the truth will adjust to it. Hyper-skepticism, on the other hand, is self-defeating. It doesn’t stop at what we can know, it just keeps grinding away like a power drill. Everything typically boils down to cultural perspective; accepted truth becomes a ruse of the power elites; and so on. All is politics.

In such a world, what’s the difference between the Taliban’s truth, the Vatican’s and that of modern scientific inquiry? Are they simply interchangeable puzzle pieces in the mosaic of life? However, they can’t all be right. Either the earth is 6,000 years old, or it isn’t. Either humans evolved along with all other life on this planet, or we are the product of a “special creation.” We can’t have it both ways.

If truth is relative, or non-existent, then there is no point in arguing over anything. But we do, emphatically. Something elusive must be at the heart of all that noise. Or, as the authors put it, “From nothing to something, to life, to intelligence, to truth-seeking.” This book is an essential guide to the perplexities of postmodernism.

Benson, an American, and Stangroom, British, collaborate on The Philosophers’ Magazine (TPM) and the website Butterflies & Wheels.