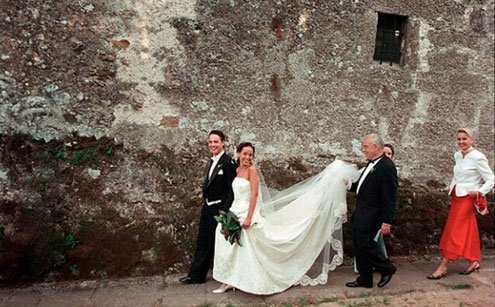 his year the wedding bells are ringing — loudly, I’d say. Earlier this month I flew to Switzerland to see my cousin get married. Next month I’ll be flying to Rome to attend my sister’s wedding. In between, my colleague at work will also be getting married. Who said that marriage was dying out?

Well, the numbers are definitely not in marriage’s favor.

Eurostat statistics issued in 2011 show that the number of marriages per 1,000 inhabitants within the European Union’s 27 member states has been steadily declining in recent years, while the divorce rate has increased. This has also led to an increase in the number of children born to unwed women. In 2009, 2.3 million marriages were officially registered, while the year before, in 2008, there were about a million divorces. The so-called “crude marriage rate” (the number of marriages occurring among the population of a given geographical area during a given period) declined from 7.9 marriages per 1,000 inhabitants in 1970 to 4.5 marriages in 2009, an overall drop of 34 percent.

What I find interesting about the research is that the lowest drops in so-called crude divorces were recorded in deeply Catholic Ireland (0.7 divorces per 1,000 inhabitants in 2010) and nominally Catholic Italy (0.9 in 2009). In Italy, divorce was only legalized in late 1970, and to this day it still takes a minimum of three years to finalize one. This may partly explain Italy’s low numbers.

Don’t get me wrong; I’m not trying to use these statistics on divorce and low marriage rates to dampen the mood. I myself am a believer in marriage, and the celebration a wedding brings with it.

Yet at the same time, I struggle (just as I am sure a lot of women do), with the notion of what a wedding and marriage should mean in this day and age, and what I find it still means; a celebration of old-school traditions that in my mind are hardly representative of 21st century values.

I won’t delve too deeply into the various problems I have with traditional church ceremonies, since that’s a choice a couple makes together, but I do cringe when I go to certain weddings and the rite still insists on antiquated vow language that includes “thou shallst obey your husband.”

The persistent use of the word “obey,” and what I feel it implies (a woman’s “subjection” to a man), disturbs me deeply. I’ll leave it at that for now.

I’m a strong believer in questioning old traditions and creating new ones. But in the case of marriage the issue becomes how far you can push the question until people see you as a feminist nutcase or, worse still, a gut-wrenching, hair-pulling, horrible bride-zilla? While researching this column, I came across an article in the Guardian by Jessica Valenti, founder of the website feministing.com. It was boldly titled “My big feminist wedding.” Valenti described how she and her now-husband decided to approach their wedding as equal partners, avoiding certain traditions (including the bridal white wedding dress) and allowing for the inclusion of double-hyphenated names. I like the approach, but I also don’t fully agree with all of it.

For example, Valenti writes about how she and Andrew (her then-fiancé) got engaged by mutual decision. No big fuss. While that’s reasonable and respectable enough, I’m still convinced that just because you believe in equal gender roles doesn’t mean you should do without a whopping-great engagement proposal. Let’s not get rid of romance just because we believe in equality!

Even a stalwart feminist should still be able to enjoy the traditions that weddings bring with them. Choosing to have a white dress won’t make you any less a feminist than deciding to wear a red, black or green one. And yes, while the white dress is traditional and expected, and therefore eschewed by many feminists, you just can’t deny that there are some beautiful white dresses out there (hello Vera Wang!) You might not be able to fully escape the politics of the statement, but I hardly believe that a dress choice will shatter, or reflect badly, on core beliefs.

Most importantly, at least for me, a marriage should be about a balanced partnership, which should be reflected in the kind of wedding you arrange with your partner, using whatever symbolism both believe is appropriate. Some feminists abhor the idea of having a ring on their finger.

Sorry, I won’t be turning down a sparkler, thank you very much, and I don’t think my viewpoint makes me any less a feminist. I think marriages and weddings should reflect compromise, taking a bit from here and there, from the old and the new, in a joint effort to create a celebration you feel is right.