Why is meringue weeping?’ 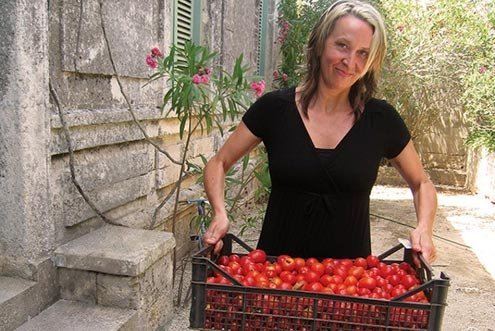 Before her teens she’s already a foodie, and (almost) ready for her unexpected future. At 10, family dysfunction leaves her without parenting. What follows are 20 self-supporting years of 18-hour restaurant workdays. But they lead to a Horatio Alger-like success story we all love: in this case, Hamilton’s 30-seat Manhattan culinary haven, Prune (“a small restaurant with a large footprint,” the New York Times wrote in 2011).

With Prune on her front narrative burner, her account wanders back and forth in time, blending in tough kicks and new kitchen tricks.

Hers hasn’t been “an easy life.” But Hamilton’s a chronicler, not a complainer. Though she’s had more than her share of nasty breaks, her unsparingly frank account veers from the victim narrative. She swiftly lists the raft of bad news that tracked the road trip of her youth. She then leads you through the day-to-day grit of surviving life’s tsunamis, and how she found means and ways, and moved on. To more work. Her current fame is still based on those 18-hour shifts.

Here’s one of Gabrielle’s daily To-Do lists at Prune: “Doctor aioli; Find pH strips for dish machine; Why is meringue weeping?; Braise rabbit; Tell dad I’m pregnant; Clean out shellfish tags; Tweak gremolata ratio.” That’s a restaurateur’s life. One she was born to. And not just by the name-game that rings through her early youth, in a family known for its big feed parties.

The huge stove’s three back burners were always lit, cooking dense broths from tails, claws, and bones: those comestibles that could be budgeted from her artistic husband Jim’s slender, set-designer income. Yet the resulting meals were haute cuisine. In those American years when housekeeping magazines featured Jell-O salads and Campbell Soup casseroles, Gabrielle and her four siblings ate “dark, briny, wrinkled olives, small birds we would have liked as pets, and cheeses that looked like they might well bear Legionnaire’s Disease.” But it all tasted pretty good.

This was the welcoming space where Gabrielle learned the private mantra that would later serve as survival kit: tough kitchen organization combined with the soul-satisfying joy of delicious tastes.

The survival kit was first used at age 10, when Madeleine announced: “Dad’s got to go; the marriage is over.” In deep menopausal depression, it was Madeleine who headed for an isolated Vermont farm. Gabrielle’s father took to daydreaming. Neither parent seemed to remember that their small children needed school fees and groceries.

To pay for those groceries, Gabrielle began to work as underage dishwasher in a nearby restaurant. At 16 she’s serving drinks in a Manhattan joint; that’s followed by five years as kitchen grunt. Taking a year and a half off, she travels Europe, Greece, Turkey. Nearly penniless once more, she discovers how great certain foods can taste when you bring total hunger to the meal.

Some of her downers? Her abandoned childhood. Feeling cooked out in New York for long periods. Heartbreak when a long-term girlfriend walked out. Divorce after an unhappy marriage… since her real love affair had actually been with transatlantic visits to her husband’s food-loving Italian clan. They recreate the family she’d lost. And they teach her the delicate fold of egg yolks into creamy, garlicky aioli.

Then, by chance, in Manhattan’s Lower East Side, a neighbor mentions a long-deserted restaurant space. Bringing a burnt out kitchen to life is the sort of hard work Gabrielle understands. Prune is born.

Its chef knows the kind of comfort food she’s going to serve: “salty, sweet, starchy, brothy. Crispy things you crave when you are totally hungry.”

You can enjoy this frank, open autobiography for half a dozen excellent reasons. One — of course — is its mouth-watering recreation of foodie experiences. A second is the pure admiration for a woman who took life’s kicks, then moved on… and up.