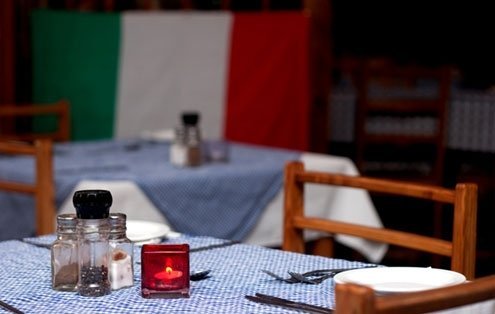 A move to Italy can alter the approach to food, and to eating.
M

y mother was born to play the pots and pans. My brother and I were awakened with smells of bacon and grits, country sausage and poached eggs or leftover cornmeal mush, now known by its culinary name, polenta. She would fry slices in butter and put them in a pool of maple syrup.

On winter days, she would place bowls of leftover Texas Patna rice mixed with cream and dusted with cinnamon in front of us in an effort to keep us conscious enough to ride the school bus. She told us it would “stick to our ribs” all day. I actually felt my hot cereal clinging to my tiny ribcage, reluctantly letting go around lunchtime, just as I felt curling vines rising though my body from the watermelon seeds I swallowed in summer. My grandfather assured me they would come out of my ears if I swallowed too many.

In the 1940s and 1950s, Texas was not a center of haute cuisine. But my mother started her subscription to Gourmet Magazine as a young mother, and even as a doodlebugger’s wife, moving 16 times in two years, I’m sure that in the tiny kitchens of her temporary living quarters, she was busy whipping up egg whites for meringues.

All of my memories of food begin with a smell. A waft of cinnamon takes me back to our warm kitchen, the wintry day outside almost dark at 4 p.m., a blue norther blowing and the house redolent of baking pie crust (she insisted it be called pâte brisée so I had a little French along with my cooking lesson). I had a small wooden board and little toy rolling pin to make cinnamon pinwheels from the scraps of her buttery pastry. She taught me how to separate eggs and beat the whites correctly and make tiny pies to go with her larger ones.

I was five years old.

I began reading her Gourmet cookbooks, volumes I and II, at 16, and was as bewitched with them as I was with “The Forsyte Saga.” And perhaps a glimmer of things to come, I wanted to make bread. My Czech grandmother in Weimar made kolachys filled with prunes and poppy seeds and stretched her strudel dough by hand over a white metal table in the kitchen. My other grandmother greeted me with a slice of warm farmhouse bread spread with just-churned butter and sugar. I segued into French breads and specialty breads and then soups and main courses and desserts, cooking myself silly through Gourmet‘s collection.

In my early cooking days, Beef Stroganoff was about the most exotic dish one could hope for, and it wasn’t until my first visit to Italy that I was transformed and dazzled by the glory of open markets, the produce sitting like jewels in their wooden cases. Living in Viareggio after college, I remember apricots simmering on the stove, smells of roasting coffee wafting up through our windows, and women out on their balconies discussing the day’s activities (more often, the night’s!), and trading recipes for pasta sauces or discussing how to make a perfect risotto.

There were lemons from Sicily, fragoline from Lago di Nemi, and the handsome butcher was having his first battle of the day with an old woman whose dog barked incessantly at the hanging carcasses of meat. We flirted with him, feeling special to get special cuts of beef and then found that he flirted with all young women.

Yet some of my best recipes came from him as he cut us a lean piece of vitello or especially lovely, small shanks of osso buco. He did, on an off day, give me a tough piece of bracciole, but I gave him James Bond bubblegum and he redeemed himself with two steaks for the price of one.

My cooking took a great leap thanks to Italy.

In midsummer, the cyclists from the Tour de France came whizzing through under our balcony. There were dancers in the streets and here and there, the mussel and clam-sellers offering frutte di mare, from which my first spaghetti alle vongole was born. Lawrence Ferlinghetti, the beat bard of the times, might have called this dish pure poetry.

Returning to North Beach in San Francisco, I was given, by my Sicilian neighbor, his grandmother’s vinegar “mother,” into which I still pour my leftover wine (when there is any!), and he taught me to crush tomatoes with my hands for a perfect sauce. That kitchen in California was a testing ground for Moroccan couscous, African dishes like doro wat spiced with berberé and Ethiopean bread, injera, with which to scoop up the stew. I cooked my way through many countries, a different voyage every day from dawn to dusk, practicing on willing friends who were always ready with advice. I poached quenelles and smashed crab and lobster shells for sauce Nantua and afterwards, bathed with lemons like Susan Sarandon in “Atlantic City”!

So many daughters, or sons, have not had the fortune to have a mother who cooked as mine did, with all of her heart and soul, and who passed on her wisdom and passion so generously to others.

I cook because I must, and because I had a mother who taught me at a very young age that a little roll of pastry spread with cinnamon and sugar is, indeed, nothing short of a miracle.