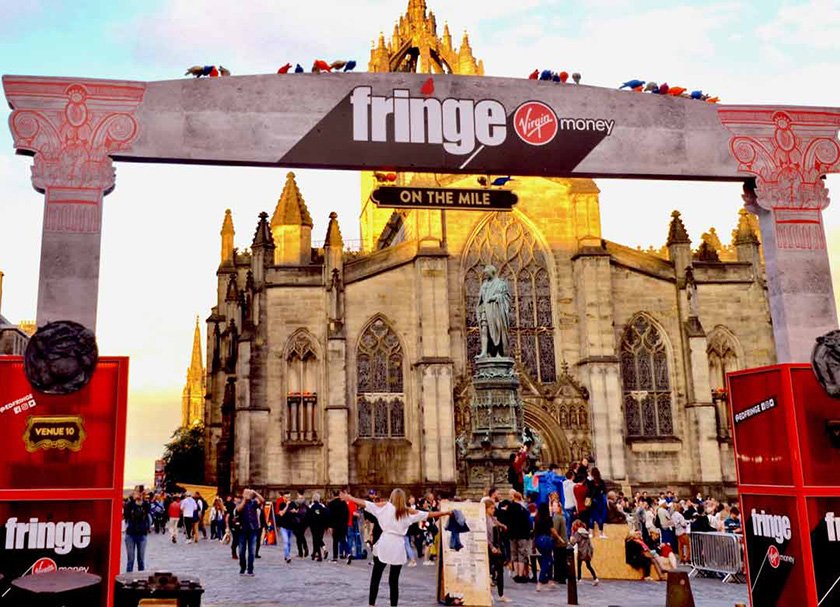 The Edinburgh Festival Fringe is one of the largest art festivals in the world.
I

was in Edinburgh for the Fringe festival, where I was putting on a show I wrote. It’s the largest art festival in the world, and with so many of the artists gathered there being actors, you see a lot of personalities. And personality. But talking to my father on the phone  made me realize that so many people still believe that actors get up on stage to be seen, to show off, to have the attention on themselves.

I can’t fathom that people still believe that to be the motivation behind someone’s choice to act. To me it reads as having the same depth as many late 90s and early aughts movies that at the time were thought to be making a deep statement but that we now cringe watching because of the ham-handed handling of sensitive topics.

Now it’s true that the craving to be seen is why some actors act. Fine. But there are other things in life that can make one feel seen. A healthy relationship. A life-changing event. A new passion slowly taking over. Better, deeper friendships. Things can happen in life that take care of that need. If you’re thinking of the theater kids from high school, maybe they did act for attention back them, but now they’ve found other sources of attention. Believe me when I say that the majority of actors today either never were or no longer are theater kids.

Showing, by comparison, is incredibly active. It’s having something to say and wanting people to experience that. It’s about adding to their life.

In fact, I suspect it’s the opposite which drives many actors. Not that they don’t want to be seen, but that they want to show. There is a difference. Being seen is passive, it’s being on the receiving end of something, it’s being the sole recipient of attention. Showing, by comparison, is incredibly active. It’s having something to say and wanting people to experience that. It’s about adding to their life. It’s about giving, not getting. And that’s crucial at Edinburgh.

There was a lot of talk about the fact that audiences are low. The majority of viewers tend towards big venues with shows headlined by already established artists. Great. But, as many were saying, this defeats the purpose of Fringe. Fringe was conceived as a way for smaller, up-and-coming artists to showcase their talent. Artists (myself included) sometimes responded with frustration. How do you draw crowds when your resources are so scant?

But beyond the frustration, there’s a very heartfelt intention.

Over and over, on various social media platforms, the sentiment I saw actors and creators express more than anger was eagerness. “How can I get people in to see my show?” Most of the people I knew or followed cut ticket prices in half, offered free tickets, gave out tickets on the street. All to have an audience. And we did this not because we wanted to be seen, not because we hoped that at the end of the show someone would come up and say, “Wow, you’re really talented.” But because we wanted them to say “I’ve had those exact same thoughts.” Or, “I’ve gone through that, you absolutely nailed what it feels like.” Or, “Watching your show made me realize that’s exactly it, but I’ve been struggling to put it into words!”

Actors are the ones who like to do the seeing more often than not, over being seen themselves.

Of course, it’s nice to be told you have talent. Of course, I’d rather deliver jokes to more than five people. Of course, I’d rather earn more. But more than that, I truly want people to see what I made because I think it can help them or speak to them or make them feel seen and not alone. Actors are the ones who like to do the seeing more often than not, over being seen themselves.

It’s so important that people understand this because this ongoing myth of acting as a self-obsessed, self-aggrandizing, superficial career is frustrating. Like in any job, there are people who fit those descriptors. But to believe that an entire group of people is dedicated to gathering others for their own selfish satisfaction is preposterous. It means people are glossing over what actors do for them. It’s no different than what a concert pianist does, but I’ve never heard someone say that a classical musician only chose that path to be seen and have undivided attention. I think it is time we stopped thinking about acting in these superficial terms. And if you don’t believe me, come back to Fringe next year and see how eager people are to just have you witness a show, paid or not, completely earnestly. It is the purest form of artists making things for a human end.