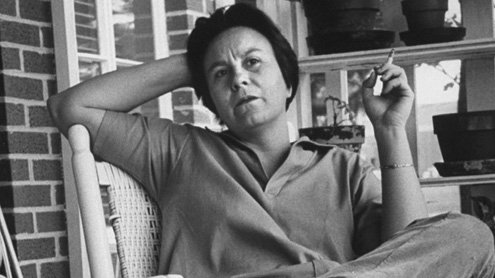 Harper Lee's "Go Set a Watchman" was produced several years earlier than "To Kill a Mockingbird," and lacks the prose and characters that distinguished the latter.
H

arper Lee’s “Go Set a Watchman” arrived amid a PR furor. “Discovered” by chance, it was billed as an earlier and rejected manuscript of her 1960 Pulitzer winner, “To Kill a Mockingbird.” But reading it begs a question: can this mediocre work from the 1950s actually come from the same hand that crafted “Mockingbird,” a novel that achieved worldwide popularity?

But the differences are telling. “Mockingbird” is adult Scout’s first-person recollection of her 1930s childhood and its drama-charged events. Its centerpiece is her lawyer father Atticus Finch, who provides heroic trial defense of a black man accused of raping a white woman in Jim Crow-era Alabama.

In contrast, “Watchman” focuses on Jean Louise “annual” two-week vacation from New York City to Maycomb and her sudden wakening to her town’s venal hypocrisy.

But while “Mockingbird” had enough character revelations and plot hooks to drag along even the most reluctant reader, “Watchman” sketches out fewer actors, most of them one-dimensional. Its third-person narration is deadened by expository set pieces. These examine (then defend) the South’s raging reaction to the Supreme Court’s 1954 Brown vs. Board of Education decision, the bombshell verdict that mandated nationwide school integration.

Jean Louis’s life in the (more-or-less) integrated North supposedly makes her a foil for Maycomb’s caste system approach and racist mind-lock. But Lee manipulates the contrast, eventually converting Jean Louise to many hometown views. The novel thus becomes an apologia (read justification) for the South’s resistance to much-resented “outside” change.

Unfortunately, it’s clumsily put together. The title, “Go Set a Watchman,” is borrowed out of context from the biblical Book of Isaiah. Big and little errors compound the confusion.

Aside from muddled details and a final, aborted sub-plot, the novel’s overwhelming problem is its narrator. Who exactly is Jean Louise Finch?

She often recalls her childhood (far more richly invoked in “Mockingbird”), remembering an incident that occurred when she was 12. But after that comes a 14-year-long black hole. She picks up at age 26 offering no insight into the in-between. Lee skimpily — and suspiciously — uses pat explanations to fill in the blanks: “sent to a boarding school”; “sent to college in Georgia”; and, finally, working hard “in New York.” But working hard at what? In fact, Jean Louise doesn’t exist as growing or grown adult. She’s merely a puppet for the fiction’s “apologia.”

To set tone for what’s ahead, her Maycomb stay begins with rude awakenings. Longtime local boyfriend Hank wants to marry her, but she’s reluctant. From her Aunt Alexandra she learns (only now?) that the marriage is socially impossible. Though Hank is a productive citizen, his drunkard father abandoned him at 12. In Maycomb that makes him unsuitable mate: lower caste “trash.”

Alexandra unwittingly provides further insight into local reality by organizing a coffee get together. The gathering introduces Jean Louise, and the reader, to the class system (“young ladies of your own age and class…”) and brutally stereotyped racism.

One dramatic episode is crucial to the novel’s goal of justifying Southern resistance to “outside” pressures. Jean Louise watches a meeting of the White Citizens’ Council chaired by her father Atticus. One after another, speakers lash out at the Supreme Court as “lackeys” for “niggers and commies.” Where’s the proud, liberal defense lawyer of “Mockingbird”? Jean Louise “shrieks inside with pain.”

She finds herself sickened as Maycomb buttresses its “conservative,” KKK-style stand against the 1954 Court decision. Yet she, too, labels that decision as unconstitutional. She’s always been a fierce (Southern) state’s righter.

The citizens meeting and her reactions yield long (and stilted) discussions with Atticus and her Uncle Jack, men who in her eyes were icons of Southern high virtue and culture. She eventually capitulates. She wouldn’t want her hometown electing any “backward” blacks, or want them as electors.

“We are Finches,” says Atticus, explaining the white man’s burden associated with his caste. His role is to help blacks (slowly) improve. Jean Louise will decide leave New York and return home permanently, to alter the South “from within,” she explains. “Our good people” (also read “white”) must gradually move ahead with integration, but “slowly,” which becomes Watchman’s message.

The problem is that Jean Louise is an empty, puppet-like character whose rapidly revised beliefs feel contrived and unconvincing. It’s basically on this fault line that the novel’s “apologia” fails. It doesn’t help that cant phrases like “Southern civilization,” or “the grace of a gentleman” are tossed around with unexamined casualness.

In the end, “Watchman” can only convert the already converted Harper Lee reader. It’s simply not well written enough to do much more.