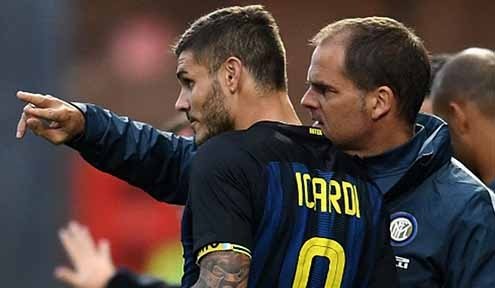 Former Dutch star and Inter manager Frank De Boer was fired Nov. 1 after failing to coax results from Argentine Mauro Icardi and the rest of his troubled team.
L

ooking at the Serie A standings 11 rounds into the season, arguably the biggest surprise is Inter sitting in the second half of the table in 11th place. They’ve lost four of their last five league matches heading into November.

The nerazzurri finished fourth place in last year’s campaign and made a net spend of over €100 million in the summer transfer market, making the slow start inconceivable to their fans. Captain Mauro Icardi and new manager Frank De Boer have come under the most scrutiny, with De Boer fired on Nov. 1 after less than three months in charge.

If the club ever needed a scapegoat for their struggles, then Icardi has bent over backwards to place himself in the line of fire.

At 23, the Argentinian striker has already managed to become one of the most polarizing figures in world football. While at Sampdoria, he ran off with — and eventually married — teammate Maxi Lopez’s wife, Argentine showgirl Wanda Nara. The whole thing seemed sleazy but hardly surprising in the world of professional athletes. The shocking aspect was Icardi’s eagerness to broadcast the entire saga on Instagram.

Since then, Icardi moved to Inter and largely stayed out of trouble. He was even named captain in 2015, around the same time that he appointed wife Nara to be his agent. To no one’s surprise, negotiations for his contract renewal this past summer were a rather public affair.

After a strong start to this season from Icardi and encouraging signs from Inter, a furor erupted in mid-October when Icardi released his autobiography, Sempre Avanti (“Always Forward”). In it, Icardi recounted a heated exchange with Inter ultras — the name given to proudly belligerent superfans — during the 2014-15 season, when the striker allegedly tried to give his shirt to a young fan but had it thrown back in his face by one of the ultra bosses, disgruntled with the team’s performance.

Icardi describes verbally confronting the fan, but the most incendiary excerpts concern the ensuing scene in the locker room, where he claimed to have been received “like an idol” by his teammates. He recounts saying, “I’m ready to face [the ultras] one by one. Maybe they don’t know that I grew up in one of the South American neighborhoods with the highest rates of crime and people killed in the street… How many of them are there? Fifty? A hundred? Two hundred? OK, record my message and let them hear it. I will bring 100 criminals from Argentina who will kill them on the spot.”

The reaction from the ultras was swift and unequivocal. Banners filled the Curva Nord, the bleacher seats occupied by the ultras, calling Icardi unfit for captain and much worse. A banner outside his house read: “We are here. When your Argentinian friends arrive, let us know.” The ultras also claimed the story was fabricated, calling out his cowardice for enlisting a child to gain sympathy.

Inter fans are divided on their captain, with many outside the curva trying to drown out the ultras with messages of support. All of this makes for a surreal atmosphere on Sunday afternoons.

Given Icardi’s track record, it’s not surprising that the young striker would wear more than just his captain’s armband on his sleeve. After all, sports stars publish tell-all autobiographies all the time. Just not at 23.

Icardi needs to question his own judgment and PR advice, but questions need to be asked about the club’s (lack of) involvement. It is unthinkable that no one in the organization screened the autobiography. If someone did, they approached it with extreme naiveté.

Roberto Mancini was Inter manager until early August 2016, when he left the club by mutual consent. He had complaints about player investment, but also about the lack of dialogue between the club — Indonesian president Erick Thohir and British CEO Michael Bolingbroke, in particular — and his coaching staff. He wasn’t told about the sale of the club to current Chinese owners, Suning Group. Mancini wanted more of an Italian presence on the operational side.

The fact that no one stepped in to put a sock in Icardi’s mouth proves a lot of Mancini’s points. There was either a lack of hands-on involvement from the foreign ownership, or a lack of contextual awareness.

Dutchman De Boer, who inherited Mancini’s role, hardly stood a chance. Besides not speaking Italian, De Boer tried and failed to make sense of a team constructed based on Mancini’s wish list. A flurry of signings in late August occurred after he’d taken charge and weren’t even his first choices. Positions of weakness, such as fullback and defensive midfield, were not adequately addressed.

Anyone who has watched Inter this season has seen a far more cohesive style of play — in the attacking third, in particular — than under Mancini, but alarming lapses in concentration that have seen Inter concede the first goal in virtually every game. While self-belief and concentration are qualities that are said to stem from the manager, one can hardly blame De Boer for the air of near-chaotic uncertainty that continues dogging the club. A stopgap manager — it has briefly elevated youth team coach Stefano Vecchi — was the last thing a team that’s had eight managers in the last seven seasons needed.

Yet Inter’s crisis of leadership originates far higher up the food chain than Icardi or De Boer. There will be no progress on the field until it’s stabilized.