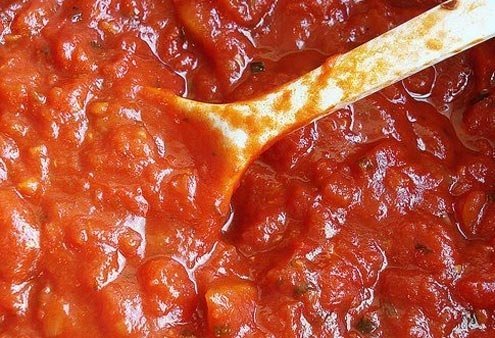 he starting block for much of Italian cooking is tomato sauce. North to south, pizza to pasta, it’s everywhere. Up north, any good ragù Bolognese needs a great tomato base. In Rome, tomatoes are key to the city’s amatriciana sauce. In the south, fusilli alla sorrentina (Sorrento) and pasta alla norma (Sicily) hinge on the quality of the red sauce.

But where do you start when a simple sauce offers so many choices? Do you use canned or fresh tomatoes? If they’re fresh, do you pick pachino cherry tomatoes or larger ones? Do you go for a mirepoix (finely diced carrots, celery and onions) base or just use onions? What about garlic and shallots? Do you put in the basil at the beginning or the end? Decisions, decisions, decisions.

Every Italian chef I’ve met has an opinion about tomato sauce. Everyone with an opinion thinks everyone else is wrong. “Si fa così…” (It’s done like this…), they tell you. Their way or you’re misguided.

The one point of convergence seems is which tomatoes to use. Uniformly, cooks say Pomodori pelati di San Marzano, a kind of plum tomato that come from San Marzano sul Sarno, about halfway between Naples and Salerno. They’re prized for their sweeter flavor and thick flesh, with the latter lending itself to slowly cooked sauces.

After that all agreement collapses.

For a ragù Bolognese you generally start with a mirepoix, in Italy generally known as soffritto. The result yields a very balanced sauce. The celery gives you freshness, the carrots sweetness, and the onions earthiness.

But you can play around quite a bit. Many people use two-parts onions to one-part carrot and one-part celery. Others divide the portions equally. One chef I met in culinary school insisted any true Bolognese needs extra carrots to give the sauce a little extra sweetness.

Even in the same kitchen, chefs can disagree on how to make tomato sauce.

Rome’s Pierluigi Restaurant, where I worked, has two lunchtime chefs, one who mans the pasta station, Antonio, from Basilicata, and a second one from Naples, Giuseppe, who handles meat and fish.

Antonio makes the tomato sauce that everyone else in the kitchen uses… everyone except for Giuseppe, who makes his own. Giuseppe says Antonio’s sauce is limiting. He insists you can only use it on certain dishes while his goes well in any situation. Giuseppe describes his coconspirator’s sauces as massiccio (burly or hefty), compared to his own, which is delicato.

Though both use precisely the same ingredients, the sauces are in fact quite different. At the end of the day, Giuseppe is right: His is more delicate, if only by a little bit.

Here’s the difference between their approaches.

Both start with olive oil and white onions. Antonio chops his roughly, while Giuseppe finely dices his. Next, Antonio pours whole peeled tomatoes directly into the pot with the onions and lets them cook without breaking them up. Giuseppe blends his tomatoes with a hand blender before adding them to the pot. Before adding the tomatoes Giuseppe tosses some basil leaves into the oil and onions for a few seconds. Antonio by contrast waits until the sauce is about half-cooked to add his basil.

They both cook their sauces for about 40 minutes over medium heat, at which point they’re just bubbling. But at the end, Antonio passes his through a food mill to break up the ingredients. Giuseppe doesn’t need that step since he did his chopping to start with.

For me, the biggest difference in the cooking is in the blending of the tomatoes before their cooking, which allows them to cook more evenly, and in adding basil directly to the hot oil, which helps it to immediately release its essential oils.

That said, my own favorite tomato sauce starts with pomodori pachini, the little cherry tomatoes from the town of Pachino, in the southernmost tip of Sicily. They pack the most punch and can make a simple sauce unforgettable.

— In a large pot bring well-salted water to a boil.

— In a large saucepan simmer the chopped garlic and peperoncino flakes in a good amount of olive oil on the lowest heat possible.

— Once the garlic is softened, but before it starts to brown, add the chopped tomatoes and pureed tomatoes. If you’re using regular spaghetti start cooking them now as they take about as long to cook as the sauce. If you’re using fresh pasta wait until the sauce is just about ready to cook the pasta.

— When you add the tomatoes turn the heat up to medium-high and let them cook in their own water. If their water cooks away add a few spoons of the pasta water so the tomato sauce continues to simmer but is not overly watery.

— Just as they begin to fall apart and not look like slices of tomato the sauce is ready. At this point add the basil leaves and let it cook for another minute.

— Add the pasta to the sauce with a little bit of the pasta water and stir in well in the pan. Add an extra splash of olive oil and stir vigorously to mantecare (blend) the pasta. For the sauce to come out a little creamy you need to slightly emulsify the oil and pasta water.

— Check for salt, garnish with a few basil leaves, and serve immediately.