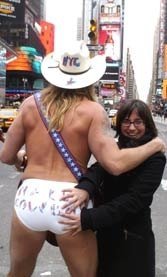 Manuela does the Apple, or a part of it…Photo by Eliot Stein.
&

#8220;I’ve never spent Christmas away from my family before,” said Manuela, looking over a blue questionnaire online. “And how am I supposed to do this if the stewardess doesn’t speak Italian?” I suddenly felt guilty for having invited my girlfriend to America. After all, Washington, D.C. was three flights from Villasalto, her remote 1,200-person village tucked into the mountainous folds of Sardinia’s southeastern Gerrei region.

For a girl who spoke no English and would be the first among her friends and family to cross the Atlantic, each metric unit from home presented further anxiety — even if my 86-year-old Catholic grandmother told her she was praying for her safe journey.

“Dai,” she demanded, breaking the silence. “Translate the survey for me.” I did, line by line before saying, “Just answer every question, ‘No.'” Another pause. Then she asked, hesitantly, “Even if I have handled livestock recently?”

I had never seen my 5-foot-2 mother tower over another grown woman until Manuela greeted her with a kiss on each cheek at our house. My mother’s open arms were soon piled high with papassinos, gattó, and pardulas cookies Manuela’s mother had baked in Villasalto.

Overwhelmed, my blushing mother took Manuela into the living room to show her a new Christmas stocking with the name “Manuela” stitched at the top. Manuela shot me a puzzled look. Babbo Natale doesn’t deliver to oversized knitted socks in Sardinia. I muttered in Italian that I’d explain later as she stretched to hug her American suocera.

“She’s as cute as a button!” my mother whispered.

The extended Stein, Henderson, Marum and Slade families met at my uncle’s house on Christmas morning. I told Manuela to stay calm, that my cousin who teaches English in Thailand was introducing his Thai girlfriend to the family, too; she’d be in good company.

“Where are we going again?” Manuela asked in the car.

“Why are American cars so big?” she asked, looking around. “And lanes and houses and buildings? Do you really need so much space?”

“Not really,” I said. “But America’s the frontier; things are big because they can be big.”

“Yes, but I expected Americans to be fatter,” a statement she would retract when we toured Baltimore.

When we emerged from the car at my uncle’s 20-acre property, my cousin, Mark, yelled, “Eliot? I almost didn’t recognize you without your name tag on!” I then saw that the entire family was sporting IDs to help the two foreign dignitaries keep the players straight. When we reached cousin Woody and his better half, Jinderat, the daughter of a Buddhist monk, she greeted Manuela with a bow, but Manuela’s puckered lips were already half-way to Jinderat’s cheek.

“I didn’t know what to do!” she said during our tour of the bay-front property later. She’d never met a Thai girl before. We paused at my uncle’’ cannon trained at the water.

“John does his part to defend the Chesapeake Bay against pirates,” I said.

“You mean like how Jesse hunts?” she joked, referring to my older brother’s “American-inspired” Christmas gift: an invitation to take her to a shooting range in downtown Philly.

“You Americans and your guns,” she smirked.

Ten minutes later Manuela donned a helmet, and was whisked around in John’s vintage World War II motorcycle sidecar. Manuela returned laughing, and my cousin, Raleigh, offered to take her into the creek on John’s amphibious 4×4 vehicle.

The next morning she reported to her parents via SKYPE that it was the most fun she’d ever had on Christmas.

A few days later on the way to the National Zoo, Manuela burst out laughing in my car.

“Look! It’s a white person!” she pointed, ecstatically. “I found the other one in D.C. who’s not you! Honk!”

Before venturing through the Connecticut Avenue zoo entrance, Manuela insisted we buy an enormous cup of coffee and walk the street holding it, just as Americans do on TV. When my father later asked her what her favorite animal was, she didn’t hesitate. “The squirrels.”

Squirrels and their fascinating, bushy tails remained Manuela’s American highlight until we walked through Times Square at dusk on the eve of her return flight. After exhausting her camera’s battery, she turned to me, saying, “I want to be American. You are so much more relaxed than we are, less judgmental and not obsessed with perfection.”

Still mesmerized by the steaming giant Cup O’Noodles bowl blocking out the sunset, she added, “The only thing is there are too many Italian tourists here.”

“You want it all for yourself?” I asked.

I smiled. “Now you know why I didn’t live in Rome.”