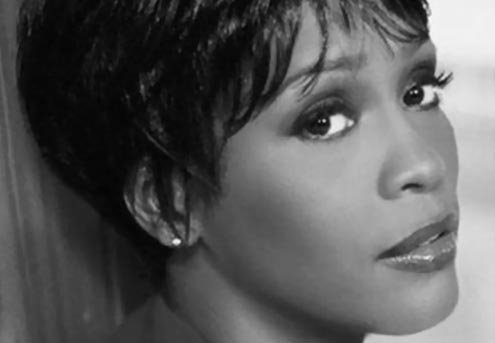 arol and I were sitting in the neighborhood bar when we heard the news. Carol’s phone beeped and she read the incoming text message.

“Oh My Gosh,” she whispered. Then louder, “Oh My Gosh! Whitney Houston just died. An overdose!”

She didn’t look up but kept staring deep into her phone.

Although I didn’t see Carol much, she and I are the same age and have a lot in common. Raised in American popular culture, we both grew up to the sound of Whitney Houston.

Whitney told the story we all lived in the 1980s. From “I Wanna Dance with Somebody” to “I Will Always Love You,” she was all over FM radio.

We emulated her fashion and were in awe of her singular presence and self-assuredness. The range of her voice expressed boundless emotional possibility.

How could she be gone?

We both looked at each other dazed, but didn’t speak. Then I started to sing, “I’m every woman, it’s all in me.” It was my favorite song. After the first stanza, I stopped. Carol’s eyes were glazed over. She really wasn’t taking it well.

She lifted her glass of wine and took a long drink. Her body sank over, hugging the bar.

“I feel so sorry for her,” she murmured, barely audible. “Whitney was really troubled. She had that abusive relationship with Bobby Brown. She was doing crack. Last time I saw her on TV she looked really awful: skinny and frail.”

I noticed too. In a recent appearance, she was a shadow of her former self. The qualities that gave her radiance were gone. She didn’t even look like the same person. I always wondered what happened.

“I know how she must have felt,” Carol continued. “With a violent husband that made her feel small. I feel that way sometimes. Some days it’s hard to feel you’re worth anything. It’s much easier to just take something to make it go away.”

The bartender came by with a bottle of red and began refilling our glasses. I waved him off, but Carol was eager.

“I already had two glasses before you got here, so what the heck, if they want to pour me more, fine by me.”

I took a small sip and tried changing the subject. But the mood was already too dark. I found a pen and started doodling.

“Well, we still see each other sometimes and it’s okay now. He’s stopped drinking. He hasn’t drank or gotten high in a year. He’s doing some Buddhist cleansing thing. What a change from when we were dating.”

She paused to sip more wine.

“If that’s where he’s at, not drinking and all, that’s fine. I just told him I wasn’t there yet. Maybe someday I will be, or maybe I never will. That’s just how it is.”

As she was finishing her sentence, I heard the overhead music through the din and smiled. “Listen, Carol, Listen.”

It was Whitney singing:

We both listened quietly.

“I always loved that line,” said Carol. “It’s such a beautiful ideal, just to love yourself. It’s way too hard for me.”

You’re not alone, I thought sadly. It must have been hard for Whitney too.