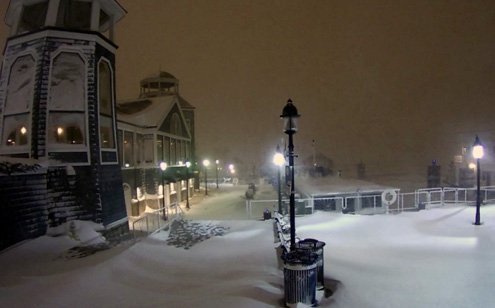 Sometimes, a blizzard is the only thing that makes sense
I

n the middle of a major New York blizzard my friend Jack invited me to an impromptu dinner. He had a pot of borsht ready to share and said he could use some company. I jumped at the chance. I’d been stuck inside my apartment and was going stir crazy.

I grabbed a bottle of wine from the cupboard, bundled up, and trudged through the snow on the eerie quiet streets.

Jack lived eight blocks away, and as a neighbor I admired his financial acumen. He’d been able to buy a Brooklyn brownstone, renovate it, and more than cover his payments by renting the top two floors. He retired early and lived comfortably on the income.

Since I had some time to go before my retirement, I thought he might have some good advice to offer me.

When I arrived, Jack was in the kitchen stirring a pot. He looked a bit disheveled. He’d gained weight since I saw him last. The buttons on his shirt pulled at his girth. I pretended not to notice.

We exchanged our amazement at the mountains of snow and swapped our favorite childhood memories of sledding and igloo making.

But Jack didn’t seem himself. Once the soup was served, he hunched over and ate in silence. I wanted to ask him about his life after retirement but it felt awkward. He didn’t look very happy.

Finally, I broached the topic. “Jack, do you think you’re the same person as before you retired? Has anything changed for you?”

He was quiet before answering.

“I’m the same person. That’s not changed. What’s changed is what I do with my time.

When I was working, I met lots of interesting people. I had the opportunity to travel to London, be part of heady discussions. It was exciting.”

“Now I keep busy. Finding things to do isn’t hard. You know I bought some property Upstate with a trailer on it. I work on that sometimes. I just put in a new wood stove. But I still haven’t figured it out. I’m getting closer but it’s not as easy as I thought.”

I was surprised. Outside of property matters, he seemed a bit nostalgic for his career.

“Retirement is sold as the ultimate life freedom,” he continued. “Freedom from the 9-to-5, from the corporation, the expectations. It’ll be great. That’s what people say.”

“That’s what I’m hoping for,” I replied. “Isn’t that what you have? You worked hard to make this happen.”

“My life has freedom, yes. But what I don’t have is meaning. I can do a lot of things now, but what does it all mean? I just can’t answer that yet.”

Jack refilled his empty glass with wine and took a long thoughtful drink. I cleared the bowls to the sink and thought it was time to head home.

“Thanks for the borsht, Jack, and your company. It was a nice change from sitting alone watching it snow.” Jack nodded and gave me a hug.

I left the brownstone and entered the cold night air. It was crisp and refreshing. I had come with admiration and perhaps a bit of envy. But now I felt humbled at our common yearnings, yearnings that exist no matter where you are in life. There simply isn’t a golden moment when all makes absolute sense.

Except perhaps when it’s winter and it’s snowing and it’s the blizzard that suddenly makes all the sense in the world.