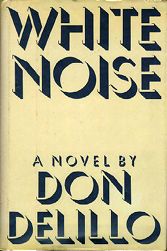 DeLillio is foremost a collector of “dense anatomies of feeling.” His 1980s masterwork is an idiosyncratic journey through consumer America seen through the eyes of Jack Gladney, who teaches Hitler studies at a liberal university in the Midwest and pops anti-fear pills. DeLillo’s cast of lunatic academics include Murray, who reads “American Transvestite” and teaches a car crash seminar. Gladney, meanwhile, “gargles” his way into speaking German and soaks in fetishes until he and his family are hounded from their home by an encroaching toxic cloud (“technology is lust removed from nature.”)

The novel, pre-Prozac and Bhopal, is a visionary spoof from start-to-finish. It’s nasty, clever, and ironic. What distinguishes DeLillo from his America-doubting contemporaries is that he never lets up or strikes a gratuitous note.