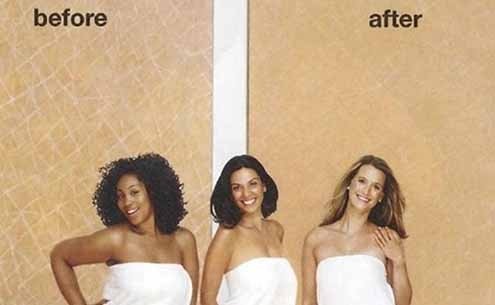 Twice in a decade Dove has gone off the rails in its ad campaigns.
T

his morning, while hurrying to an appointment, I passed a disproportionate number of tall, skinny, pale, blonde women. Perched on impossibly tall shoes, most clutching their telltale “head-books” — portfolios of their faces in black and white — they strutted down streets with lifeless runway expressions that made them look like vampires accidently caught in daylight.

Was it a look of superiority, I wondered? Disdain? Or did it mask deep insecurity?

Late September is fall fashion week in Milan, among the city’s most publicized rituals and one that annually attracts thousands of international models.

Long scorned for its unrealistically narrow view of what makes a beautiful body, particularly a female body, the fashion industry now faces similar criticism about its portrayal of men. By glorifying unrealistic body representations, critics insist the industry stereotypes looks in ways that heighten personal anxiety and trigger public shaming. Insecurity can in turn lead to anorexia in young women and steroid abuse in young men.

Yet the fashion industry exists in a sphere of its own, unrelated to social norms or commonplace expectations.

It has no interest in plain Jane or regular Joe as they shop for jeans. Attacking it for portraying unobtainable images or peddling fantasies is like blaming Harry Potter for messing with the occult. But stereotyping carries major risks.

The way a society sees itself depends in part on images people pick up from mass media. When mass media absorbs marketing images tied to European ideals — and most related to clothes and beauty products are — racial views are dangerously skewed. The under-representation of human variation in terms of skin color, appearance and physiology creates misleading norms.

Consider plasters (called Band-Aids in the U.S.). What skin color should they reflect? In 2012, three Chinese designers came up with the concept of Chameleon Bandages, designed to change color based on skin tone. But innovative trends aside, the Eurocentric perspective remains strong, and can occasionally yield disastrous results. In 2011, the European division of Dove came under fire for advertising its Summer Glow body lotion as available in “Fair to normal” and “Normal to dark” shadings, implying that white skin was “normal.”

British blogger and video game designer Mitu Khandaker was among thousands who objected to the campaign. “It is harmful because it positions ‘dark skin’ as abnormal in a culture where racism is still a very real and potent thing,” she wrote. ‘This kind of labeling, subtle as it is … sticks to people’s minds. It sticks to the minds of those who are supposedly ‘normal,’ and it sticks to those that it [makes] ‘abnormal.'” Summer Glow was discontinued.

But Dove didn’t learn from its mistake. The company recently posted a U.S. Facebook video clip showing three women of different ethnicities taking off T-shirts to reveal different versions of themselves, with the black model becoming white.

Again under siege, Dove quickly backtracked. “We do not condone any activity or imagery that intentionally insults any audience,” it said in a statement. But the ad had little in common with the company’s mission statement — to make “everyone feel beautiful in their own skin,” build positive self-esteem, and inspire “all women and girls to reach their full potential.”

Though Dove eventually admitted its blunder and cancelled the campaign — “We got it wrong … it should not have happened,” an official told Cosmopolitan magazine — the idea that the campaign failed to set off alarm bells within the company’s marketing and social media structure before its release remained troubling. While racial portrayals can be minefield for marketing campaign developers, basic sensitivity toward the idea of inclusion shouldn’t be that hard to understand.

This spring, while working with an artist on the cover of my recently released novel, I pondered the idea of body typing and so-called race normalization, the sociological term for considering a certain racial stereotype as a norm.

I asked the artist for a cover showing a young man looking out to sea at the moon. Since most of the characters in my book are of non-European decent I also asked the artist to find a representative model with “healthy, natural” musculature. In general, she creates photomontages from stock web images. When wrote back saying she was having a hard time meeting my request, I went online to find my own stock photo of a model I felt would be appropriate to the story.

Correct me if I’m wrong, but isn’t it supposed to be the “worldwide” web? Here on Earth, humanity comes in a wide variety of shapes, sizes and colors, with European traits representing only a small percentage of the whole. Yet most of the images I found were of European models, with many of the men looking artificially pumped up.

I eventually found a suitable photo, but the search drove home what’s wrong with the fashion week look, which is that too often it is the only look, and that’s a global lie.