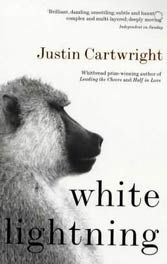 South African James Kronk, a 47-year-old failed filmmaker, returns from London to attend to his dying mother in hardscrabble lands near Cape Town. There, in the midst of a sprawling personal reassessment, he purchases a small farm and befriends scuttling black tenants and a baboon named Piet (Kronk’s father was a successful naturalist writer).

Cartwright makes no apologies for his Camus-worship; Camus is billed as Kronk’s boyhood hero. “White Lightening” — which refers to Kronks skills as a teenaged sprinter — is an empathetic 21st-century version of “The Stranger.” Kronk’s sense of human wilderness urges him to seek solace on the fringes: baboons, bees, and whales. He is newly compassionate (he tends daily to his mother) but incurably alienated; divorced, he lost only son Matt to an asthma attack that occurred while Kronk was bedding a starlet. “We have been taught to believe,” muses Kronk, “that life equals some form of self-fulfillment; there is no such thing, only moments of happiness.”

Kronk is in fact a wholly tentative man, a throwback existentialist intrigued but defeated by “the human project” — ”Life has become a series of random events that have somehow lost their proper order and significance.” It’s perplexing that the prolific Cartwright — South African-born, British-trained — isn’t mentioned in the same breadth as Coetzee, McEwen, Swift, and Crace. On “White Lightning’s” merits alone, he should be.