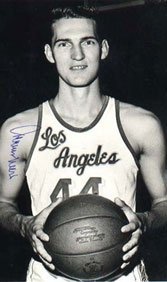 Did you play for the Lakers? Or are you a spy?
H

e had once played for the Lakers, he told me. It seemed plausible. He was 6-foot-5 at least, and while his frame seemed softer than any athlete I’d ever seen, he looked like he was pushing 60; a belly was allowed.

“So you were around with Jerry West?” asked a friend of mine, listening intently to the conversation. “And Wilt Chamberlain?”

Good guys, the former Lakers player said, good guys. But before we could break in with another question, he added, “But now, I’m a writer. In fact, I’ve written several bestsellers.”

It’s my turn to be interested. “Really? What are they?” I ask. My friend takes out his iPhone, Amazon.com at the ready to check them out.

Well, I’m still working on the latest one, the man says. The names of the other two are, um…

As the conversation trickles away with the man’s realization that he’s picked the wrong people-a Lakers fan and a writer who are, worse still, armed with internet capabilities-we nod politely and turn back to our own conversation. “He’s full of it,” Steve whispers to me. “I know,” I whisper back.

It’s not in the fairytale way of Florence, where you sometimes wonder if anyone actually really lives there or if the few locals scattered among the tourists have been paid to stay and give the city an “authentic” feel. In Rome, you see suited bureaucrats sharing bread on their lunch breaks, hear the harsh accents and colorful curses of the local dialect, smell the garlic and onions sizzling under the mastery of the Italian matriarch in the apartment next door. There’s no doubt about daily life’s rhythms. And even when they are performed in public, the theatrics of the Romans seem to take place behind closed doors. Their lives are for no one’s show but their own.

Those who come here from elsewhere, though, are a different story. Unfettered by bonds and long memories of home, backgrounds are embroidered; characteristics change. A California native says he’s from Bavarian royalty. A New Jersey girl whose closest encounter with the United Kingdom was working at an Irish pub speaks with a thick English accent. A Finnish woman claims she’s fled to Rome because of a jealous ex-boyfriend, who happens to be an “Arab spy” and has a global network of cohorts out to get her.

Some listeners raise their eyebrows, but many Italians and expatriates alike, faced with implausible stories, just shrug. They know that for every tale that proves untrue, there’s one even more absurd that turns out to be right.

And nearly every foreigner’s journey here starts with some adaptation of identity, however slight. It’s not just the ways that people change when immersed in a different culture. It’s noticeable even in introductions: In Rome, Sara, former administrative assistant who dabbles in poetry, becomes Sara, poet and English-language teacher. Even if teaching English is what makes ends meet, greetings often put passions first.

At first, I felt misled by these introductions. But then I remembered parties I’d been to in the States, where the first, and often only, question inevitably was “So what do you do for a living?” and the answers always seemed judged — a particularly misleading approach for those who didn’t, in fact, want to be in their present position or industry, or who hadn’t even found jobs yet, or who had passions they were still working to manipulate themselves into moneymakers. Perhaps there was something to using introductions as more than a swap of résumé titles, after all.

Still, that kind of redefinition of identity can be slippery. Take it far enough, and middle-aged men who always wanted to play in the Lakers and write bestselling books aren’t just calling themselves sports enthusiasts and aspiring novelists. It’s as if, surrounded by colorful people, immerse in a city laden with two millennia’s worth of ruins and romantic myths, it’s the only way some expatriates feel they can compete.

But I’m still hoping to hear the real stories. Whatever brought the not-really-Lakers-player to Rome, however he wound up playing darts and sipping a pint in a bar, alone, in his mid-60s, seems far more interesting than any past fame.

Then again, I speak as a journalist. And tour coordinator.

— The author worked as a Washington, D.C. reporter for US News & World Report magazine before moving to Rome in late 2009. This is her first column.