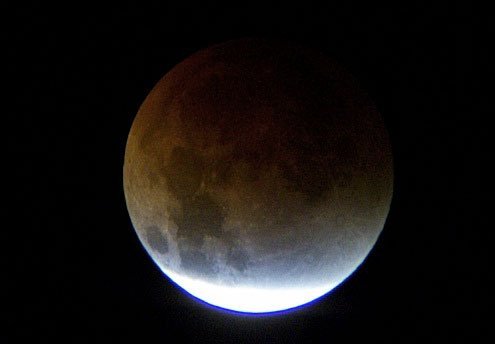 For the secretarial demographers of intelligent design, the darkness picked Muslims over Christians.
D

arkness at Noon is a strange brew. Only a God of Big Things, science apostrophic to His existence, pulls a hand over a third of the earth. Science has no hold on Yahweh, Jehovah or Allah. The secretarial demographers of intelligent design will note that darkness sought out mostly Muslim territory — Turkey and Libya, Niger and Ghana — where thousands of awe-seekers camped out to get their fill of morning night.

NASA researchers called the event “impressive” — a merry declaration for them; post-modern rhetoricians got by with “very cool,” a one-size-fits-all quip in an inarticulate decade.

Very cold might have been more apt. Temperatures plunged.

In Turkey, The Washington Post found Anita Johnson, an assistant U.S. attorney from Boston. What did she see, what did she feel? “It reminded me how small and insignificant we all are.”

Insignificance is a badge of honor.

Creationism’s aggressive fringes are populated with passive-aggressive believers — both fundamentalist Christian and radical Muslim — determined either to clarify or purify the human condition. Primitive conformity based on uniform aptitude and knee-jerk vulgarity suits radicals, rich, and wretched alike.

It runs into problems only in democracies that simultaneously preach infinite choice and evangelical rigor. The choice overload yields youth immune to the civics of optimism; many are apolitical and uneccentric. Ideals respond to more obvious commercial rewards while passion exists to serve God.

Not a very cool prospect unless your deity recycles his earthly goods (a more malleable absolute) or promises to remove you to a salacious venue where interest rates are low, makeovers free, and beer on tap.

Take heart, or religion — or if you’re a free thinker mix them up.

In January, NASA announced the discovery of comet dust around what’s called a white dwarf. A white dwarf, not Disney’s kin, is cold mollusk of matter crisped out after a hundred billion years of cosmic bellowing. It’s a broken furnace.

‘”We are seeing the ghost of a star that was once a lot like our Sun,” wrote Marc Kuchner of the Goddard Space Flight Center.

But his full statement was abridged to exclude bad tidings. “I cringed when I saw the data,” Kuchner wrote, “because it probably reflects the grim but very distant future of our own planets and solar system.”

NASA told The New York Times it was “not in the habit of frightening the public with doom and gloom scenarios.”

With fragmented Shuttles on its plate, it’s not.

That’s the property of the denial department — radicals of Mecca or Jerusalem. Alarm is their meat.

The meat of others, increasingly, is smallness and insignificance.

When conformity faces the Big Questions it walks in reeking of faith and skeptical of quirks — never mind Quarks.

Grimness is censored when the need arises. The insecure are challenged acquire not inquire, remorse reserved for mid-life.

Playing fool is second only to playing victim in a sandbox of colorfully named anxieties. Victims in turn require advocates to articulate their woes.

Small and insignificant? You bet.

It might as well be 1906, patent remedy sellers run amok among a citizenry of white dwarfs.

Now how cool is that?