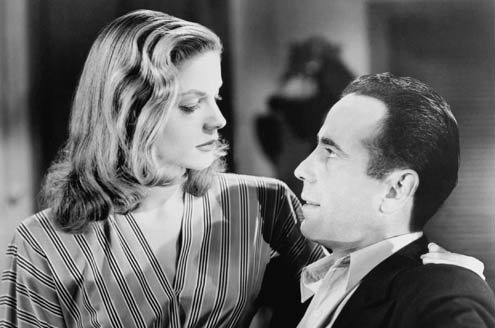 You know how to whistle, don't you? Put your lips together and blow.
T

ell your friends you want to bone up on Howard Hawkes or watch Bogart in his prime, but a date with “To Have and to Have Not” is really all about sizzlers Bogy and Bacall.

Anything-for-a-price Harry Morgan (Bogart) lives in French-run Martinique where he and boozy buddy Eddie (ever-chipper Walter Brennan) move cargo, no questions asked. When Harry suddenly finds himself having to choose between the anti-Nazi Free French and the collaborationist preferences of his less savory local pals, conscience kicks in. “Don’t bother me with moral details” Bogy would just as soon find a way of dodging sides (as always), but he finally picks the right one (as always). Meantime, he and hot barfly Marie “Slim” Browning (Bacall in her debut) dish out fully clothed screen sex that puts porn to shame. (Marie to Harry: “You know how to whistle, don’t you? Put your lips together and blow.”)

Forget the storyline (Hemingway) and just watch Bogart grin whenever Bacall is around: he can’t not lust for this husky, towering dame. And she’s too nervous not to give it back in kind. Without bedroom nudity or gratuitous lewdness, the two knocked out the Hollywood power grid. They married within a year.

Off the grid is Wes Anderson’s 1996 “Bottle Rocket,” an overlooked indie charmer that that tugs at the decent side of the big and often angry American cape. Two aspiring brothers put it together and got best friend Anderson to direct. Welcome then to Owen and Luke Wilson’s starter movie, and Anderson’s dress rehearsal for a decade of endearing quirkiness.

Anthony Adams (Luke) is released from Texas mental hospital and teams with his friend Dignan (Owen) to plan a ludicrous heist. The comedy crooks want to go big-time and in the process meet a real gangster — played by a charming and disarming James Caan. Their grand schemes go nowhere because Anthony falls in love with a motel maid named Inez.

Anthony and Dignan are terminally inept but incurably caring. First movies, like first novels, matter because they define sensibilities. If you want to understand why Anderson’s later “Rushmore” and “The Royal Tenenbaums” worked, see this.

And if you want something that sounds like pet store animation but is anything but, try “Danny the Dog,” a 2005 French, British and U.S. co-production that literally snarls (the title was later changed to “Unleashed,” subverting the wordplay of the original).

Jet Li is Danny is an emotionally stunted and submissive man trained to behave as a martial arts assassin when his metallic “taming” collar is removed. He’s trained, caged, and employed by Uncle Bart (the sparklingly mean Bob Hoskins), a Glasgow enforcer who sicks him uncooperative clients (“My own guided missile,” says Bart).

When an assassination attempt on Bart sets Danny free, he finds himself in the reassuring keep of blind piano tuner Sam (Morgan Freeman) and his awkward 18-year-old pianist stepdaughter Victoria (Kerry Condon) — until Uncle Bart comes knocking again, that is.