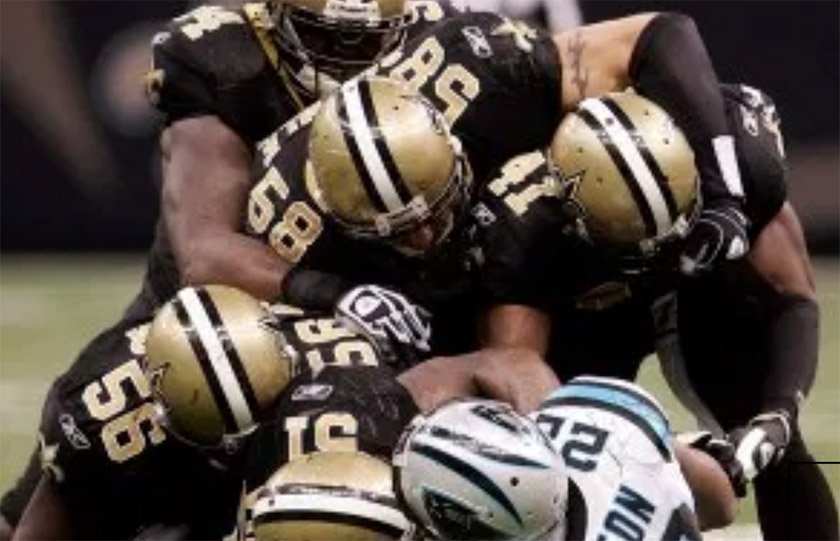 In NFL football, a penalty. In virus coverage, the more the merrier...
I

n U.S. professional football, a congenitally violent sport, a penalty is assessed when marauding defensive players exaggerate the force needed to stop the forward progress of the player in possession of the ball. The violation is known as “piling on” and referees usually call it when too many defenders heap themselves atop an already immobile opponent. The infraction falls under the broader category of “unnecessary roughness” and is intended to check the game’s intrinsic ferocity. Primal urges can get the better of charged up players intent on using any means to make a point.

Improbably, the same kind of impulsiveness can contaminate mass media, with cable news coverage of the coronavirus a disturbing case in point.

Once implicitly governed by codes of conduct that curbed excessive emotionalism, mass media — led by television — came all but unhinged as a result of the terrorist attacks staged by Islamic extremists on Sept. 11, 2001. These attacks, perhaps because of their unbearably spectacular nature, voided the emotional restraint news editors had spent decades attempting to forge and instill.

Government and media, taking a cue from the wildly melodramatic talk shows of the 1990s, piled on shamelessly. Broadcasters evolved into a breed of distressed or angry Cassandras slavishly driven by so-called breaking news, which indiscriminately spilled details both major and minor into an ever-agitated screen ticker tape.

The coronavirus would be perfect fodder for today’s news spew — if only disease didn’t beg the now-defunct values of coolness and restraint.

Since then, news has been transformed into a 24-hour portrayal of a wounded planet, painted not only to inform but also to unsettle.

The coronavirus, a fast-moving global outbreak, would be perfect fodder for such a spew — if only disease didn’t beg the now-defunct values of coolness and restraint. Instead, as with precedent-setting 9/11, the virus coverage is increasingly tilting toward what might be called “authoritative hysteria.” Authoritative because the news remains the news; hysterical because that same news depends on alarm for its forward progress.

Post-9/11 TV coverage, first over months, then years, helped feed a spectrum of public worries that permeated all aspects of life. Some viewers grew depressed while others anxiously made bad news their own.

Media registered the potency of this collective anxiety and modified its approach to both man-made and natural calamities. Its “worst comes first” method, rooted in the crazy-making repetition of footage showing commercial jets crashing into skyscrapers, is now the broadcast norm. As a result, collective stress thresholds are lower and anxiety sicknesses varied enough to count hundreds of antidotes.

This is the pathology now taking up residence in the virus, whose stealth awakens closet agoraphobia and stirs gut-level phobias about all aspects of human hygiene, from sneezing to defecation. Contagion’s core hosts a medieval if not tribal heart breaking news knows to prey on. The U.S. Ebola scare of 2014 shared the same visceral ingredients, boosting an already deeply lodged mania for disinfectants and other cleansing products that if overused do more harm than good to the hunan immune system.

As the virus grows in mental stature those already in its thrall grow closer to psychosomatic vulnerability. Fearful minds multiply each new case by ten, the perfect post-9/11 arithmetic.

But mixing a real virus with breaking news tempts irrational consequences. And a pandemic of the mind is nothing to trifle with in a society that uses anti-depressants as mind aspirin.

Breaking news also has a stalking dimension, since smartphone feeds are the opium of 21st-century life.

After World War II, newspaper editors who’d witnessed the damage caused by 1930s demagogues, and uneasy about the hysteria growing up around the Cold War nuclear menace, chose headline sizes carefully. Banner headlines inevitably rattled markets and nerves and were usually reserved for assassinations, presidential elections, and war. National morale mattered. Large headlines were reduced in size if a crisis persisted. Front pages also included many items so that no one event invited breathless attention.

These antiquated codes reflected a period more attentive to the relationship between free speech and collective emotion. For better or worse, such attention has been suspended. All is fit to emit.

None of this reduces the peril posed by the virus. It is now clear the malady will inflict grievous harm to many fundamental aspects of human life. Just as it is also clear it will eventually be slowed down and finally stopped.

Yet mass media’s love affair with this virus gone viral shows no sign of abating, with pundits as ever glad to speculate on a stricken future. After 9/11, similar pundits insisted new attacks were imminent.

No cooler heads were allowed their say, either in media or government, and unnecessary roughness prevailed at home and abroad.

The result is a species that is swiftly spooked and feels uneasy about itself, as well as for the future of the overheated planet. No sneaky sickness was needed to add to the doubt. Yet it’s here, and does in ever-larger ways.

Few know to place breaking news in perspective or to mount inner defenses against embellishment. Nor is there a referee present to blow a whistle. Anxiety is the enemy we know, and without its heralds we seem lost.

— Editor’s note: Italy has declared a nationwide ban on unessential travel. This will also affect travel into and from Italy. Public transportation continues to operate. See the Italian National Institute of Health website (in Italian) and the U.S. coronavirus crisis site for further information.