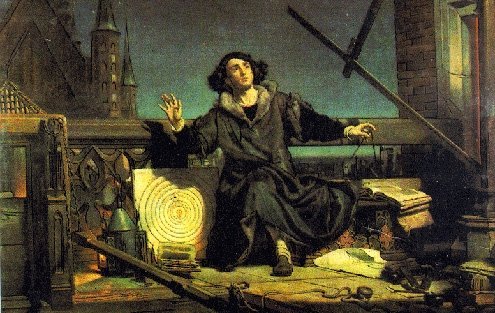 Copernicus: Worn down by time.
W

hen Ptolemy and Copernicus meet to chat about love, which they do in Rome on Tuesday, the Egyptian brings his sensitive son while the Pole comes alone. Two thousand years of coffee has solved little. They know this but they also like talking.

Whenever Ptolemy mentions the obliquity of the ecliptic, a favorite theme, Copernicus objects. “You’re being difficult again,” he says. “You are a difficult man.”

This remark irks Ptolemy, who is older. Why is he, Ptolemy, the difficult one, when it is Copernicus whose heliocentric eccentricities annoy popes?

Ptolemy has proved to his own satisfaction that Earth is at the center of the cosmos; it does not move. It is the fixed point around which distance thrives. In love, the Earth’s math vexes all caprice, with the figure of man the pillar around which all events occur. Spherical trigonometry covers equinox. The equator includes kisses. Nothing happens by chance.

Confusion is sentimental selfishness that ignores logic. If a man speaks soothing words to a woman under the moon, the orb’s shine is unconnected to their cooing. A lover’s quarrel is illogical. Latitude and the solstice resist love. They simply are.

Copernicus arches his eyebrows. He has come to this same small bar for at least 400 years. Now, the barman has changed and the street has been renamed for serpents. Once, he answered Ptolemy’s assertions with passionate ease. But today it’s rainy and cold. His mistress insists on taking walks without him, citing the curative powers of solitude.

The heavens are unbalanced, Copernicus reminds himself. That he is special is what he thinks but not what he knows. Ptolemy’s broader sense of certainty, which shields him from doubt, annoys Copernicus, perhaps because he envies it.

If the firmament is in fact in flux, a proposition that convinces Copernicus, he trivialize his mistress’s wish for solitude as a relief from such burdensome knowledge. That she would walk without him cannot be a surprise. Circumjacent elements are made close by gravity. Within gravity is the haphazard, and chance in mischievous grasp. All is pulled downward, yes, but not all falls down.

Copernicus’s melancholy circumstances remind Ptolemy of a young man he met in a Roman province of Upper Egypt. The young man had fallen deeply in love with the already-wed daughter of an Alexandrian merchant. The daughter, mother of three children, repeatedly told to the young man of her unhappiness. He listened. Their bond grew. Gradually, her weariness and doubt infatuated him. The young man thought of this as love, but it was not.

“We attach ourselves to the fixed that we recognize,” Ptolemy tells his Polish friend. “Everything we feel is relative to our own need. Surprise is not casual. It is the precision we come to internally.”

Over the decades, Copernicus has tried hard introduce Ptolemy to imprecision. He has dusted off a parchment with an ancient Vedic text that reads: “The Sun never sets nor rises. When people think the sun is setting, it is not so; they are mistaken. It only changes about after reaching the end of the day and makes night below and day to what is on the other side.”

Resonant words, Copernicus tells his friend, but wrong. Earth cannot be selfish. It is the center of nothing. It is one whim among millions, vanity’s vexations infinite. All is in flux, he again tells Ptolemy.

Ptolemy tries changing the subject, as he has for 50 years. “When will she be back?” he asks.

“How do you measure solitude; how do clock a whim?” replies the Pole. “What is its time?”

“There is no whim, my dear friend,” Ptolemy says, asserting age. He is at least 1,400 years older than Copernicus. “There is only your position in terms of where she stands. It is how you see her that…”

But Copernicus interrupts. “You are a difficult man,” he murmurs.

Copernicus has had enough for today. That the sun is setting does not depend on his place the café or on the street. That the face of Ptolemy’s boy is partly, then fully covered by shadow is not casual. That his mistress makes solitude curative, even restorative, is not covered by the data of the ecliptic.

Ptolemy believes there are 1,022 stars in the sky. He has charted them. Copernicus knows there are many, many more. But he is informed less by science than by yearning, and he has no desire to insist.