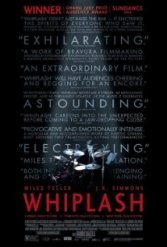 American writer-director Damien Chazelle’s movie about a ruthless jazz instructor and his undeterred drummer pupil is a musical version of the “be all that you can be” school of American myth-making, the kind that uses the stage as a Marine Corp. boot camp.

Miles Teller is Andrew Neiman, a college-aged drummer eager to make it big — think Buddy Rich — at a famous New York City music school. His instructor is Terence Fletcher (J.K. Simmons), a jazz pianist-cum-drill sergeant who demands perfection of his charges at the risk of unleashing machine gun torrents of verbal abuse. Eager, then broken, then eager again, and finally bloodied (literally), Andrew seems more victim than pupil — until the awakened puppy dog gradually acquires the thick skin of his killer instinct master.

Yet this is an indie movie with a decidedly hackneyed Hollywood heart. Those who try hard and work to beat the odds eventually see their potential rewarded. Subtlety and jagged edges are sidebars at best. Andrew’s predictably dismissive family is tossed in only to lengthen the odds against him.

Teller and Simmons are fine enough as student and taskmaster, with the snarling Simmons perfecting his Oscar-winning bad guy side, but it’s the drumming, and the harsh and sweaty physics of jazz, that steal the show (particularly during the fantastically ferocious final 15 minutes).

Insults can coax perfection so long as the berated learn to resist abuse and transform its provocations into unwavering resolve. Fair enough, but it’s hard to keep such an one-note premise alive without giving the lead characters a little history and nuance, which Chazelle — who bases the story on his high school band experiences — mostly decides against, preferring a brassy and basic morality play.