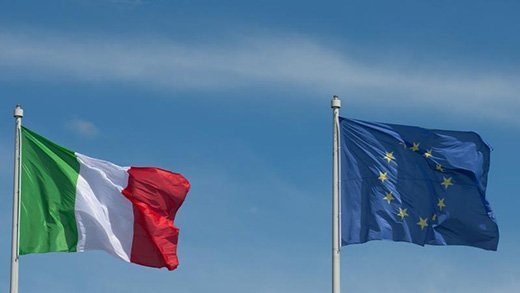 Now, say some, the EU is the master and Italy the slave.
R

everse American history for a moment. Think of a country composed of a few dozen states, each sovereign and separately governed though contiguous. Imagine a transcendent figure eager to unite the whole, broadening law and creating a national legislature with at least some binding power over the many states with unity as a goal — the larger whole uniting under a collective umbrella.

America started small, but was unwritten by nationalism. Not so in Europe, whose states grew up separately and often quarreled and fought, ultimately leading to two inconceivably costly world wars.

After those wars, both fought in the 20th century, Europe sought a “never again” pact. It would begin through reconstruction and economic agreements but culminate, it was hoped, in a grander project including all of the continent’s major states.

The project went forward, beginning as the European Economic Community and culminating toward the end of the century with the European Union, a project suddenly larger than its original ambitions thanks to the end of Communism.

After centuries of warfare, the goal was noble. The states would seek peace through binding EU agreements and seal the peace by creating a common currency, the euro, so that all could participate with greater ease.

Not all favored the euro, with some seeing it as a threat to national sovereignty (Britain included), and others sensing they’d be stripped of the known, of wealth, if a “third party” currency driven by stronger economies came to the fore. But all except Britain soon shed their doubts.

Europe of the millennium was largely celebratory. The euro was introduced in 2001 in the founding states, later in others.

This is when the problems began. The new Europe, emboldened by its own glow, refused to shed many habits of the old. Powerful states such as Germany and France, while driving forces toward unity, were reluctant to create a powerful legislative and executive branch in Brussels, the seat of the union, valuing their own serenity and elbowroom over those of others. Murmurs of a two-tier, even three-tier Europe began making the rounds. At the time, the noble project, and much of the West, was flush in money. Few saw the risks of weak EU leadership, instead falling back on old nation-state thinking: that the strong should hold sway over the weak, using not weapons but money as leverage. Giving greater sway to Brussels would only erode that aim and potentially make the likes of Berlin and Paris into “slaves” of their own creation. The EU moved slowly on the drafting of a constitution. It was reluctant to give any of its official institutions, its Commission, its Parliament, anything but symbolic sway. It passed laws and sent aid aplenty to nations that needed it, but also invested recklessly in states unlikely to ever be able to pay it back. The debt would later be a source of tension, defensiveness and resentment.

It built and funded a massive bureaucracy that when recession hit, and hit hard, in 2007-08, looked greedy and overweight. That crisis saw the Union’s powerful states begin to demand financial reforms from weaker, damaged states, further eroding the collaborative spirit. The demands seemed to undercut the spirit of the original whole, which was to work for and respect nationality equality. Debt-heavy southern European states were suddenly portrayed as pariahs, weaklings, with Greece bailed out of bankruptcy, but only under duress.

Noble goals slipped into venality and culture wars broke out, with accusations on all sides. For all the immense good the European project had done, it was now at the mercy of its shortsightedness in failing to create an impartial executive.

Now, Brussels is a dirty word among populists, a symbol of a kind of impunity, of taxation without representation. Irrationality and tribal allegiances prevail.

Countries that badly wanted the Union to succeed and flourish, in part to erase past sins – Germany in the forefront – were again, to some, cast in the role of bullies, users, abusers of the meek. In 2016, Britain, never wholly committed to the project, voted to withdraw — shocking many. Now Italy, drowning in debt accumulated in part when borrowing was easy and EU oversight at a minimum, points fingers at Berlin, at Paris, at Brussels, and populist advocates speak of yokes, of masters and slaves (Italy now the latter). While financial markets entwined, the Brussels-led hegemonic European “superstate” that Czech EU skeptic and former President Vaclav Klaus warned of 15 years ago  never came to pass (“There will be no more sovereign states in Europe with fully-fledged governments and parliaments,” he said in 2003.)

How such a fundamentally important project could go so wrong in 15 years would seem like a mystery. A European Union was once seen as a nirvana, proof that centuries of hostility could be reined in and a common good forged.

While such hope still exists, it has been stained, perhaps forever, and the blame falls on those who two decades ago failed to deliver on the promise of a functional executive, one that could at least try to operate outside big-boy vested interests. That may have been too much to ask. A country is the sum of its will, but also its history, and when sovereignty boasts the ultimate upper hand, the national “class” system can’t emerge from its own shadows. Its old instincts come to the fore. And eventually resentment takes to its respective barricades and a founding partner, Italy, is energized by the prospect of breaking ranks. Breakage becomes the noble calling, Europe helpless to understand how it has come to flirt with its own undoing.