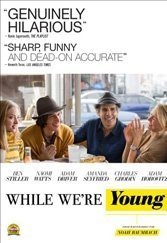 Josh Schrebnick (Ben Stiller) is an ambitious, pseudo-intellectual documentary filmmaker who lives in New York with his beautiful but bland wife Cornelia (Naomi Watts). They’re both in their early 40s, childless — this while all the couples around them are busy exhaling babies. Josh, an impressionable procrastinator, has been trying for a decade to finish a documentary but — “proud and selfish” — is stuck in his neurotic tracks. Prudish Cornelia, unable to conceive, pretends all’s well when it isn’t.

The conceit of Noah Baumbach’s occasionally insightful but ultimately predictable comedy is simple enough: a couple nearing middle age meets younger couple and falls into the thrall of their missing youth. The older folk turn younger, or feel reinvigorated, by the yung’uns, until they slowly but surely evidence unexpected “vices” that are anything but cool.

Child is father to the man is part of the story, since Jamie is the opportunistic advice-giver and Josh, desperately craving a protégé (read son) and attention. But the more the odd friendship evolves, the more generational similarities emerge, in that vanity is ageless. The ambition Josh lacks, the hustling and amoral Jamie has in spades. But Jamie lacks the moral compass “Joshie” swears by.

As a dig against venal, self-involved, baby-craving forty-something’s, Baumbach’s story has its satirical moments (Baumbach turned 45 during its filming). As it harder poke at driven but unprincipled twenty-something’s it’s somewhat more ambiguous. That’s because Baumbach is better at satirizing his own “aging” generation and 21st-century adult conformity (and confusion) than trawling for wisdom about a generation whose values are more fluid, which youth is in general. “I wanted so badly to be admired,” Josh says toward the end, “…to stop being a child imitating an adult,” and that in a nutshell is the sad truth in a provocative, interesting and ambiguous film in which no one is really adult. Nice performance by Charles Grudin as Cornelia’s documentary-maker father.