While the Women are Sleeping 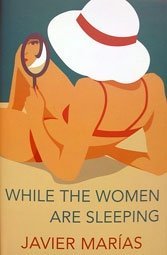 By Javier Marías, translated from the Spanish by Margaret Jull Costa

“The person who has not been conceived dies most,” says the narrator of the story “Isaac’s Journey,” pondering the enigma of a family curse. In fact, the space between the being and the not is the obsession of the stories in this enigmatic, ghost-infested collection, most written when veteran Spanish novelist Marías was in his twenties.

Some characters, like Marcelino Iturriga, are pencil etchings with a voice. Iturriga notes off-handedly that no one any longer listens to him. He is also dead, one of a number of cranky if clever phantoms to whom Marías gives voice.

The ante rises when ghosts stay away. In the title story, a man on a beach holiday with his wife meets another man who relentlessly films his attractive girlfriend intending to make a 24-hour record of her life. What seems benign soon turns ominous (“… rather than allow my adoration to die, I would rather kill her…”) In “One Night of Love,” a Madrid man sees a mirror image of himself in a Barcelona work colleague and is so disgusted by his “other” self that he tries to overhaul his life, except that his Barcelona doppelganger inevitably remains a step ahead.

In Marías-world, stories are nocturnal secretions, stains in the shape of people, most waiting on their own end, often unable to choose between themselves and their mirror images, or simply absent (take the woman who’s so entranced by a sitcom she fails to notice her breasts are being stroked). These early tales — “The Life and Death of Marcelino Iturraga” was Marías’ first published story; he was 14 — reveal the incipient workings of a major writer who swears by a kind of inquisitive fatalism: “The books we don’t read are full of warnings; we will never read them or they will arrive too late.”