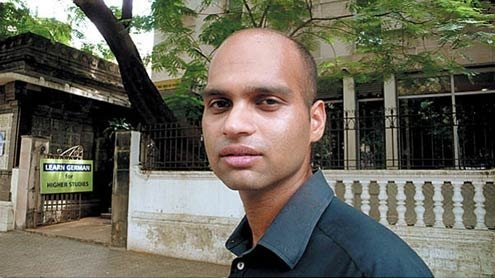 Aravind Adiga: Bitter laugher, and a Booker.
I

n raging, raucous laughter Munna Balram Halwai (a.k.a. The White Tiger) recounts his life story in the “new” India (“The White Tiger,” by Aravind Adiga, Atlantic Books: London, 2008). Why? Because he’s heard that Chinese PM Wen Jiabao arrives in business-thriving Bangalore. In just seven days. To discover, for his own countrymen: How Any Man Can Become An Entrepreneur.

“My success story exactly,” Balram reflects. Who better to give the PM some straight business advice?

But how? A Wanted-Poster servant who killed his master isn’t for public meetings. So each night before the visit, under his brilliant office chandelier, awaiting calls for his large taxi fleet, Balram composes one of the seven chapters in his autobiographical letter to Jiabao. It’s an assassin’s mad mix of betrayed innocence and grim guilt. And savage social satire. It swings 360 degrees, lashing at schools without books, hospitals without doctors, open sewage streets, a government run by bribe.

For if this first-time novelist and 2008 Booker Prize author performs forensic dissection of the “new” India, he also creates a dazzling dark comedy. His pages crackle with sarcastic anecdotes, ambiguous sneers, sadistic guffaws. Balram’s own asides act as the novel’s regular comic drumbeats: “That was a joke, sir. Ha!”

Following that first strident “Ha!” Balram lists his insider data. If the PM wants to know India he has to understand there are two Indias-the “India of Light” and the “India of Darkness.” Human destitution and fat riches exist side by side. Balram’s life adventure is as whacky and painfully complicated as the two Indias. Here are its bare bones:

Our narrator’s impoverished childhood is in Laxmangarh village, in the “India of Darkness.” There a teacher cancels the boy’s sole identification (“Munna? That’s no real name”) and dubs him Balram. Being sure to add his low-caste ID, “Halwai.” Later a school inspector finds he’s the only student in class that can read and exclaims: “You’re unique; you’re the ‘white tiger.'” That rare creature. The inspector forgot, or forgot to mention, that the white tiger is also an endangered species, and a fierce predator. There’ll be murder — and worse — to come. Though Balram’s first move on the rags to riches path begins in slapstick disarray.

Exuding political correctness the village landlord’s rich son, Mr. Ashok, takes inexperienced Balram as his driver. He needs a low caste servant on his payroll. And clever Balram more or less manages to drive “Master” and his American wife Pinky Madam to Ashok’s family job in New Delhi, in the “India of Light.”

Here masses of human dereliction are almost lost to view in the glitter of five star hotels, fast cars, and money. And here elegant Ashok finds his “job” is as family bribe-runner. He and Pinky Madam share enraged lament: “What a fucking joke.”

Balram sympathizes. He adores his Master. Like most servants he suffers a “rooster coop” mentality. Roosters raised in brutal confinement will remain in their place even when the cage door lies open. Unless… some high voltage shock spurs the animal to flight.

It’s a big shock to Balram when Mr. A. orders him to confess a child death caused by Pinky Madam. And though luck saves this servant, Mr. A. casually decides to change drivers anyway. He’ll post Balram back to Laxmangarh, back to dirt and crushing poverty.

Is there a solution? For a white tiger there is.

He steals one of Ashok’s heavy bribe bags. And kills his master. That spreads Balram’s “terrible likeness” on Wanted Posters everywhere. And it forces Ashok’s landlord clan to traditional, ritual revenge-well understood and foreseen by Balram: the culprit’s entire family must be tortured, disemboweled, and slaughtered.

The gain? Freedom. Escape to Bangalore. Here his ex-master’s cash bribes the police; they cancel all current taxi licences. Balram’s new fleet is now the sole authorized service. It escorts young women call-center workers — “The people who run America. Ha!” — to and from their 3 a.m. shifts. Lucky he had all those Ashok rupees.

The cost of success? There are nightmares, of course, in which he vividly pictures his family’s torture. There’s the terrified moment on a street corner when he imagines a passerby recognizes him from the Wanted Poster.

And yet, “Prime Minister, sir,” despite the danger of being caught, “it was all worthwhile, to know just for a moment, just for a day…what it means not to be a servant.”

On the seventh evening, his chronicle concluded, Balram signs off as: “Ashok Sharma, The White Tiger of Bangalore.” He already has his new identity prepared-just in case. He takes his ex-master’s first name, “in memory.” And, reinventing himself to the end, the old Munna Balram Halwai assumes a top-caste surname. “Sharma” signifies both “bliss” and “protective shelter.” One of Balram and Aviga’s last, desperate jokes.