Where snacks go to die 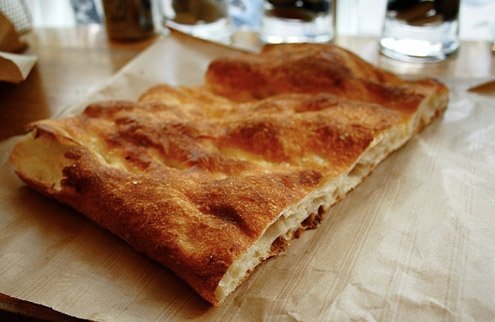 Pizza Bianca may not qualify as a snack, but try telling Romans.
A

Italians, on the other hand… niente.

Italians are moved by a different approach to snacking. Before it became fashionable (and a thrifty dinner alternative), a snack was an aperitivo with drinks usually consisting of a handful of unrinsed briny green olives and poorly seasoned peanuts. Sometimes, pistachios and the bizarre mais tostato — corn kernels on steroids, tossed with massive quantities of MGS — slipped into the picture. And that was it.

But just like watching a movie without popcorn feels wrong, so does watching sports on TV without bar nuts. Not so in Italy. Why is that, my inner 50 percent American wonders?

The culprit for this strange rapport with nibbles may well be merenda, the classic afternoon pick-me-up Italian kids know as after-school rocket fuel. Low blood sugar is repaired through slabs of crusty home-style and sugar-dusted bread that is slathered with butter or just rubbed with a fresh tomato and a drizzle of olive oil. There’s also the more “modern” Nutella fix. Another possibility is the panino culture. On the nutrition scale, sandwiching cured (usually pork) meat between two slices of bread sure beats any handful of toasted nuts.

But the fact remains that Italians, and Romans in particular, have their own vision of snacks. I’ve tried to pinpoint a few of these items using my son — the quintessential Roman omnivore — as a case study.

— Pizza Bianca doesn’t really qualify as snack, because al taglio (by the slice) it can easily qualify as lunch. Tiny cut squares of plain, undressed pizza (don’t call it focaccia, please!) commonly shares restaurant basket space with bread slices or on happy-hour spreads. Stuffed with exquisite mortadella, you’ll also find them in wee chubby hands of teething cherubs or in the backpacks of students for their mid-morning spuntino.

Rome Pizza Bianca is a kind of wild card. My own pushers are Antico Forno Roscioli, Forno di Campo de’ Fiori and my tiny neighborhood “no name” pizza al taglio dealer (he and his twin brother each own Maseratis). The brothers offer only a handful of “flavors”: plain tomato, mozzarella, spicy mushrooms, bell peppers (that’s not pepperoni mind you), and pizza con le patate, a delightful carb fest topped with thinly sliced roast potatoes.

— Rustici is a loose term that defines all small, bite-sized and flaky puff pastry appetizers commonly served at office parties. These finger foods can include mini “pigs in blankets” (tiny franks), morsels of spanakopita with spinach and goat cheese fillings, or small numbers with tomato or plain ricotta cheese and bacon. They’re not as fancy as a vol-au-vent but stem from the same concept. Very good assorted rustici can be bought by weight at Palmieri, an old fashioned pasticceria tucked away in a hidden courtyard of the bourgeois Prati neighborhood.

— Pizzette di sfoglia are another typical Italian buffet food. I can put away a tray minutes. That said, a bad pizzetta di sfoglia — a dry, cottonmouth-inducing, wrinkled one — can make your life hell. Done right, however, these round or oval two-inch pizzette can work wonders on the soul. Get the good stuff at Antico Forno Roscioli (see above), Panella and Panificio Bonci, which bakes some of the best in town.

— Tramezzini baffle me. Too small for a club sandwich, too big (and cucumber-less) for a tea sandwich, these fluffy white bread productions are often slapped with way too much mayo and way too scant a filling (which occupies just the center, leaving corners dry and empty). The worst image in a café is seeing day-old tramezzini curling in neon-lit display case, mayonnaise gelling and colors fading in the middle. On the other hand, a fresh one can hit the spot as a quick lunch followed by a strong cup of espresso. Casa del Tramezzino (not kidding) was a great spot in Trastevere, but it closed a few years ago, alas.

The newest and best “place” — Tramezzino.it — has become my latest obsession. It home delivers some tastiest tramezzino snacks I’ve ever tasted. The fillings include ham and porcini, truffle-scented mortadella and tomato, delectable chicken curry, and speck and radicchio. These come on assorted wheat germ and spelt breads with light dressings. There’s a large vegetarian selection, or the Zone-approved combos, without mayo. Orders are placed online and delivered in eco-friendly boxes.

— Taralli can’t be classified as crackers. They’re Italy’s healthy answer to America’s nut fixation. Okay, the Neapolitan version is made with lard instead of olive oil, but Puglia taralli have more appealing cardiac ingredients: flour, olive oil, fennel seeds and salt. These are kneaded into tiny loop-shaped crackers, which are first poached, and then baked to a crisp. Bartenders always have a bowl of these addictive little things standing by at cocktail hour.

I don’t think I’ll ever understand some of the powerful cultural differences that divide my Italian and American origins. For example, I’ll probably never get why Italians don’t do nuts, or why they have a higher alcohol threshold than Americans, or even why they nurture an unexplained dislike of ice.

But that’s is another story.